The Boondocks: Talking about Race

December 3, 1996 in University of Maryland’s school newspaper, Diamondback. It moved to the hip hop magazine The Source in 1997. It made its national debut through Universal Press Syndicate on April 19, 1999. First of five books (Because I Know You Don’t Read The Newspaper) published in 2000.

While The Boondocks mostly takes place in a mostly-white Maryland suburb, the comic’s hero, young black radical Huey Freeman, is all Chicago. It is Huey’s move with his family, including younger brother Riley and Granddad, from the West Side to Woodcrest that informs the landscape, and the contrast between the two places gives rise to storylines and debates. Woodcrest, i.e. “the boondocks,” represent isolation from an urban, racially-diverse culture. Huey is named after Black Panthers co-founder, Huey P. Newton, and is skeptical of all authority, buying into an endless stream of conspiracy theories. Huey rails against a large swatch of political figures, from George W. Bush to Condoleezza Rice, as well as a Who’s Who list of pop culture icons, including black figures like Whitney Houston and Bill Cosby. Riley, on the other hand, is a budding anti-intellectual who admires rappers and generally aspires to the “thug life.” An aspiring comedian classmate, card-carrying NAACP neighbors, a mixed-race friend, and others add to the collection of characters making pointed and uncomfortable commentary about race and race relations in the United States.

The strip created immediate and relentless controversy, causing many newspapers to pull the feature or else relegate it to editorial sections.

Complex.com’s Brenden Gallagher, who ranked The Boondocks among the top 10 comic strips of all time, wrote, “The Sunday funnies need more comics like The Boondocks, and more comics need fearless creators like Aaron McGruder. Telling the story of a black family living in a white town, the strip pushed what’s often the most milquetoast section of the newspaper into previously unheard of territory.”

McGruder based the comic strip on his own experiences. Born in Chicago, McGruder and his family uprooted when he was six years old, relocating to Columbus, Maryland. His comic strip spawned five The Boondocks books, as well as a popular late-night Cartoon Network show that ran almost nine years starting in late 2005. A popular episode revolved around a return to Chicago for a funeral. 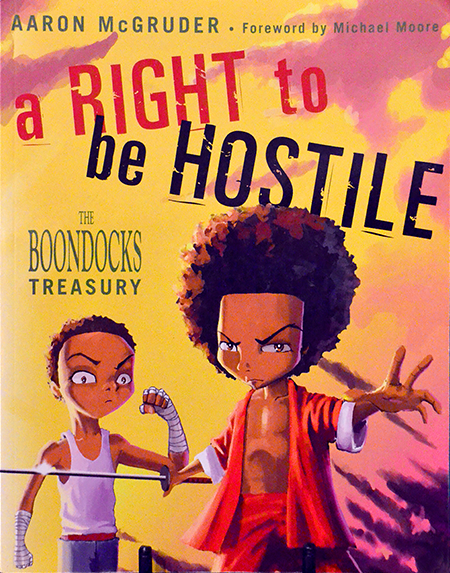