At the height of Prohibition, Frank Willard named his derby-wearing, cigar-chomping Moon Mullins after moonshine whiskey. The character immediately appealed to readers, who were drawn to quirky, unrefined street characters full of Chicago grit and good-hearted foolishness. Moon frequented pool halls and drove a taxi that his kid brother, Kayo, won in a raffle. A gaggle of colorful bit players, like the chauffeur Mushmouth, the lazy, petty criminal Uncle Willy, the pompous Lord Plushbottom, and the burlesque queen Little Egypt, come and go.

In Moon Mullins, Willard “created the antithesis of family life by bringing a group of low-life characters together in a boardinghouse setting,” writes Wiley Lee Umphlett in 2004’s The Visual Focus of American Media Culture in the Twentieth Century: The Modern Era, 1893-1945. “What they lacked in togetherness, though, con-man Moon and his assortment of loser-type cronies made up for in an ongoing series of hilarious escapades.”

Moon Mullins lasted nearly seven decades, and, at its peak, was syndicated in more than 250 newspapers. Willard relied on his underling, Ferd Johnson, to do much of the work while he enjoyed a Moon-esque existence, traveling extensively, golfing, playing with his kids, and sending in completed strips from here and there. Johnson, then just 17, began drawing for the strip a few months after its debut and took over nearly all of the duties a decade before Willard’s death in 1958.

Johnson had been a student of Willard’s at the Chicago Academy of Fine Arts, and subsequently started visiting his Tribune office. “I went up and hung around and watched him draw,” Johnson said. “He finally said, ‘Well, if you’re going to hang around here I’ll put you to work.’” In addition to a modest salary, Johnson got to join Willard on the same Tribune floor where resided the era’s most successful cartoonists.

Willard was born in Anna, Illinois, and moved with his family to Chicago when he was 15. “So I went to Chicago where my old man was practicing dentistry,” Willard is quoted as saying in a December 12, 1942 Chicago Tribune feature. “He wanted me to be a lawyer or a doctor, but I couldn’t be that because I had been fired out of so many schools. He didn’t want me to be a cartoonist because they were all drunken bums, but I became one anyhow.” 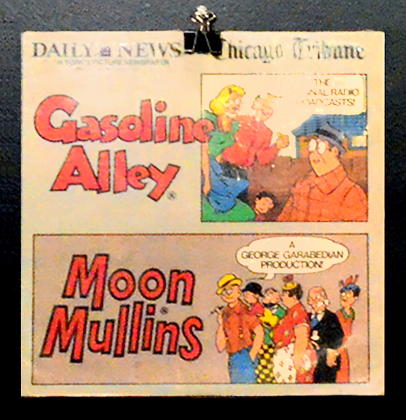