Run: Limited to the debut and one other appearance

Turtel Onli’s Malcolm-10 “was created by the genius of Imhotep to eliminate the destructive Aversions of the Lost New Afrikans,” according to the book’s introduction. As the story opens, a mad scientist constructs a superhero built to combat inner-city problems. “You have been programmed with data, instincts, and vision,” says the creator. “Your physical properties are great and will adapt to your needs!!” Malcolm-10’s arms are derived from John Henry and his legs from Jesse Owens. He has the quickness of Wilma Rudolph. Adversaries describe him as “some dude with a mean hair-do” who looks like he’s on steroids.

In the inaugural installment titled The Cleansing of New Afrika, the superhero greatly accelerated the movement known as the Black Age of Comics, which Onli says has its origins in the 1970s.

Onli, who co-wrote Malcolm-10 with Punkin X, drew the main character based on his experiences growing up in Hyde Park, living in Englewood and Pullman as a young man, and working in the Robert Taylor Holmes and Cabrini Green. Much of the story’s landscape is a composite of Onli’s Chicago, though there are more overt depictions, such as St. Sabina Church in the pre-Father Mike era. (The drive-by scene in the comic book is based on Onli’s memory of a similar episode involving his then- classmates, which left a young girl dead).

Prior to Onli’s involvement in the Black Age of Comics movement, he worked as a major market free-lance illustrator, and had already written his first comic book, NOG. He found not just resistance to black artists in his profession, but ignorance that most often resulted in sweeping dismissals. “The idea was to have a genre,” Onli said. “The movement is to grow the genre so that it becomes a nexus of creativity, culture, and commerce. So that people can make money doing it.” Having come of age during the counter-culture 60s, Onli said he knew that a successful movement had to have a commercial component.

In much the same way, Malcolm-10 preaches commerce, to go along with education, respect, and a general adherence to proper behavior. Onli has been a public school teacher and an art therapist; he’s founded art centers and art guilds; he is a successful business owner and top-tier artist. All that informed the story of Malcolm-10, as well as its philosophical underpinnings. “My relatives were highly gang-connected,” he said. “As a little child, I saw the madness from the inside. The problems are internal, not external. This is not what I call a tribute to the oppressor that most stories are; this is about internal issues that need to get resolved.”

The character Malcolm-10 appears again in Team BLANGA, an episode in which he goes after Nazis spreading diseased thought throughout Africa.

“We’re the reason you’re seeing the mainstream promote all these black characters,” Onli said. “They’ve watched the expansion of Black Age of Comics from where I started it to where it is now. They’re like, ‘Okay, let’s see if we can jump on it.’” 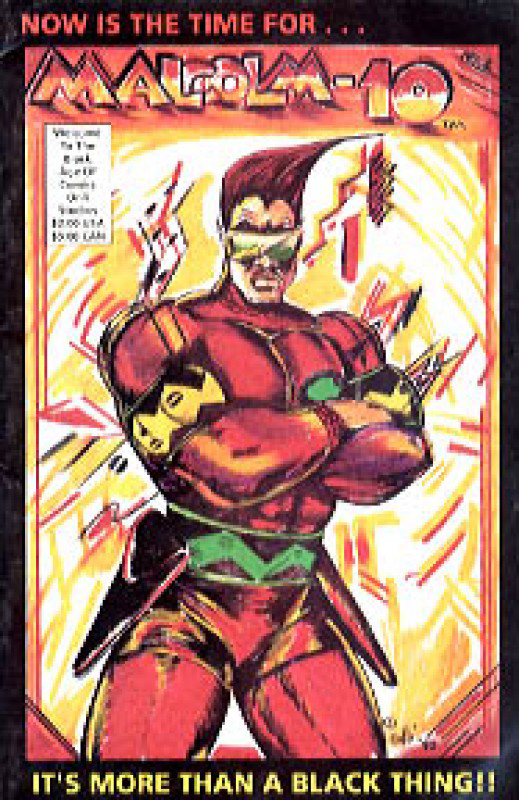