In our age, when current events topple most anything the imagination can create, reporter Darryl Holiday has merged the two in Kedzie Avenue, a comic city beat.

Kedzie Avenue serves as a “microcosm of the city,” according to Laura Pearson, writing in the Sept. 10, 2015 Chicago Tribune. She goes on to call the book “a blend of sequential art and shoe- leather reporting.”

Holliday and his co-creators, Erik Rodriguez and Jamie Hibdon, use the geography of the street as a kind of structure around which to explore many characters and stories, as well as recount history that gives context and heft to the narrative. It’s an ambitious and unique strategy, much as Studs Terkel’s Division Street was before it. The book brings to the graphic medium all The savvy and wonder of the Chicago neighborhood stories—from Nelson Algren’s The Man With the Golden Arm to Sandra Cisneros’ The House on Mango Street to Adam Langer’s Crossing California.

Columbia Journalism Review wrote, “At times evoking the tradition of big-city metro columnists— or even the spirit of one of this city’s literary lions, Studs Terkel—their work offers heartfelt, often newsy, snapshots of life in Chicago, from a jail inmate’s wedding at the Cook County Courthouse to one South Side community’s drastic demographic change through the eyes of a longtime resident.”

Kedzie Avenue, a major north-south roadway that spans more than 20 miles, cuts through a variety of neighborhoods and ethnic enclaves. Formerly a beat reporter for DNAinfo Chicago and the Chicago Sun-Times, and now the editorial director and co-founder of City Bureau, Holliday used his journalism background to interview former alderman Bernard Stone, a man living under an underpass, and many other subjects. Chicago Magazine wrote that, “Reporter Darryl Holliday and illustrator Erik Rodriguez are Chicago’s pioneers of the comic journalism medium.” 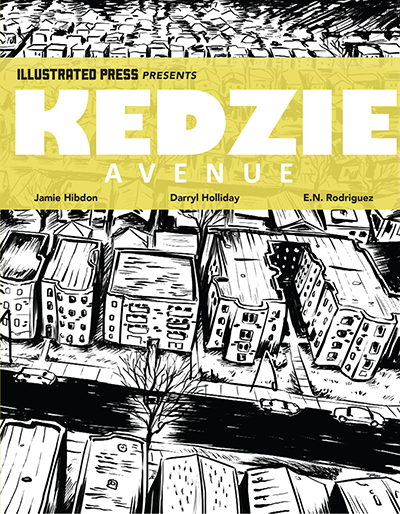