Grimjack first appeared as a back-up story called “The Dogs of War” in First Comics’ Warp, until First Comics gave the character his own book.

Ostrander writes in Grimjack #75 that he at first conceived the character to be the star of a series of prose stories, set in post-apocalyptic Chicago. Grimjack is the street name of John Gaunt, a sword-for-hire, ex-paramilitary war veteran and former child gladiator who operates from Munden’s Bar in the Pit, a slum area of Cynosure, a pan-dimensional city to which all dimensions connect. “Call me a mercenary. Call me an assassin. Call me a villain,” Grimjack says. “I am all that and more. My name’s John Gaunt, but out on the streets of Cynosure, I am called Grimjack.”

Grimjack represents one of the many high achievements that evolved out of a group of Chicagoans who blurred the lines between comic books, theatre, and opera, between hard-core realism and fantastical science fiction, and who in the process gave credence to the lasting impact of the indie comic movement. Ostrander, a longtime friend of Mike Gold, was brought on board when this group attempted to institutionalize and expand upon the success it had experienced with WARP, “the world’s first science fiction play in serial form,” which had debuted at Chicago’s Organic Theatre. Ostrander, who had been a cast actor in the Organic Theatre Company, had only turned to writing comics in 1983.

Stuart Gordon (director, creator, and co-author of WARP, along with Lenny Kleinfield), said he wrote WARP in 1971 because “We weren’t able to get the rights to any of the characters from Marvel, so we created our own.”

The play was a huge hit at Chicago’s Organic Theater and subsequently on Broadway. Nearly ten years later, with the production back in Chicago, Rick Obadiah met Mike Gold at the Chicago Comicon, where WARP’s cast and crew were involved in a series of panel discussions. Obadiah wanted to turn the theatrical hit into a comic book, and brought the more experienced Gold into the fold to make it happen. But negotiations with Marvel and D.C. did not result in a deal, and so First Comics became the vehicle to do so. Gold brought in Ostrander among many talented people, including Chicagoans like comics legend Mike Staton, who became both a contributor and art director.

Ostrander blended together elements of noir, fantasy, thriller, horror, and mystery, and Grimjack fought vampires, corrupt politicians, crime bosses, even robots. The book defied classification, and showed how independent comic books could push boundaries in ways that mainstream publishers could or would not do. 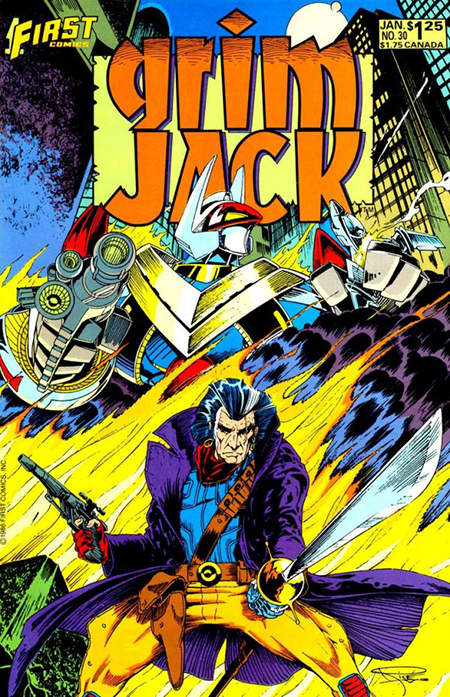