Run: 70 years, with various artists, including Trib columnist Mary Schmich, taking over upon Messick’s retirement in 1980. At its height, the strip was carried in 250 newspapers, but fell near the end to 65, with more than half of those international publications.

As American men went off to World War II, American women, including the stylish reporter Brenda Starr, went to work. When the strip debuted, Brenda was stuck in her Chicago newsroom grinding out obituaries and baby notices—until she confronted her boss, Mr. Livright, about getting a chance with a “real” story. The determined redhead eventually traveled the globe chasing stories for The Flash, all the while getting entangled in sometimes- preposterous adventures.

Rita Hayworth inspired the character’s look, while her name came from the era’s beloved debutante, Brenda Frazier. Severo writes, “The Brenda Starr comic strip was a symphony of décolletage, good legs precariously balanced on high-heeled shoes, and Dior-like clothing that no woman would be likely to wear to a newspaper office. During the war she was an ace reporter, chasing spies and other malefactors in cities and in jungles, fighting off sharks, giant squids and other ravenous animals, but selling war bonds, too. Her red hair was always attractively coiffed; her eyes always glistened with tiny starbursts.”

Messick was a testament to how difficult it was for women of her time to break gender barriers. She chose to sacrifice her real name, Dalia, in favor of a gender-neutral name that might at least deter out-of-hand rejections. Though she had studied at the Art Institute of Chicago, had worked steadily as a greeting card designer, and had been drawing comic strips from her teenage years, Messick’s submission to New York Daily News was flatly rejected by publisher Joseph M. Patterson. Patterson’s secretary, Mollie Slott, rescued it from the waste bin. After accepting Slott’s suggestions for revision, Messick eventually won Patterson’s tentative approval. 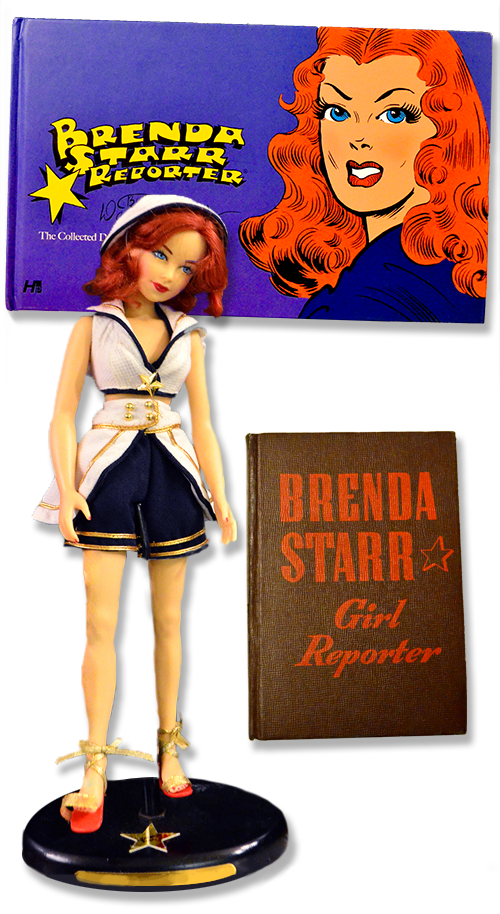