Debuted: Debuted: 1968, when Green’s religion-obsessed character first appeared in the strip “Confessions of a Mad School Boy,” published in a periodical in Providence, Rhode Island. The following year, the name Binky Brown appeared in the underground comic, Yellow

Chicago-born Justin Green is considered the father of autobiographical comics, according to Ryan Standfest, writing in The Comics Journal (www.tcj.com). Green wrote what many consider the first comic memoir, “Binky Brown Meets the Holy Virgin Mary.” The story explores Green’s struggle with scrupulosity, a form of Obsessive Compulsive Disorder, as the title character comes to age as a Catholic in 1950s Chicago.

Binky Brown, an adolescent school kid, withstands all manner of peer torture, as well as self-flagellation. Binky’s Davy Crockett hat is stuffed with Twinkies, he gets tossed in the girls’ locker room, kicked in the ass by the girl he desires, gets his toothbrush dipped in the toilet, and on and on. There is no relief for Binky’s guilty psyche, not even the many forms of penance he undergoes, mostly for sins of lust.

According to the World Heritage Encyclopedia, “Intense graphic depiction of personal torment had never appeared in comic book form before, and it had a profound effect on other cartoonists and the future direction of comics as literature.”

Indeed, Green inspired his roommate, Art Spiegelman, to try his own memoir comic, which, some years later, became the seed of Maus. 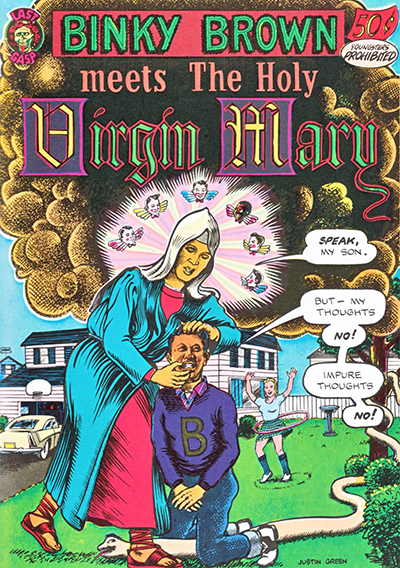