Created by: Skip Williamson and Jay Lynch, among others

Run: Eight Issues, published sporadically (or as Lynch wrote, “only…when we feel like doing one”) ending in 1973

Jay Lynch served as editor of Bijou Funnies, which launched in Chicago in the summer of 1968 and went on to be one of the most important underground comic book series in history. Skip Williamson, Jay Kinney, Robert Crumb (who started Zap in San Francisco), Justin Green, and Gilbert Shelton were among the contributors. Prior to the Underground Comix movement, sex, drugs, and political activism in comics were strictly taboo. What Lynch and cohorts created was a movement, a comic book scene.

Lynch’s Nard N’ Pat, a regular feature in Bijou Funnies, made jokes out of subjects like satanic rituals. Other Bijou writers found humor in serial killing, sexual fetishes, and class warfare. The comic spoofed cultural institutions, such as Playboy: in Bijou #6, a bit called “Hef’s Pad” featured a devil-like, duck-billed party patron who sticks his finger up a well-endowed woman’s shirt, saying, “I’m a big Hollywood producer, Doll. This is yer lucky day!”

Bijou Funnies evolved out of an earlier Lynch publication called Chicago Mirror, a humor magazine that included comics and had roots in an antiestablishment attitude. Bijou Funnies gained a loyal Chicago following, in part because Lynch promoted it heavily and in part because the publishers changed the distribution mode.

“Our books were not distributed on consignments,” Lynch explained. “We sold books mainly to head shops.” It was places like the Mole Hole on North Avenue, which sold posters, rolling papers, and bongs, that carried the comic book. Instead of the old system, in which comic book publishers were not paid until issues sold, Lynch and his cohorts invented “a method of wholesale with return policy.” In other words, carriers could apply the unsold comics, at wholesale prices, to copies of new issues, allowing all the copies to remain on the stand at once. This system, according to Lynch, became known as direct sales and it soon replaced consignment.

“We followed the same business model as the Zig Zag paper company would to sell rolling papers to head shops,” Lynch said.

Bijou Funnies and other publishers in the movement enabled dramatic changes in the entire industry, giving way to Marvel’s Comix Book in 1974. Marvel was the first mainstream publisher to do anything with that kind of social relevance, and it included the work of luminaries like Green, Trina Robbins, Kim Deitch, and Spiegelman. 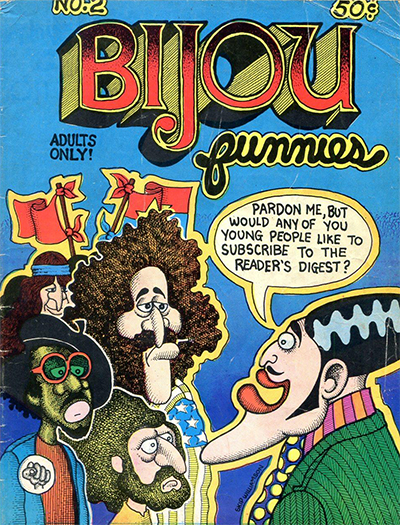