Joe Meno quietly, relentless produces literature of dazzling variety and ferocity. Big, important novels. Serial comic strips. Anthologies. Pop culture explorations. Experimental stories. Plays. Even a musical. He often—I’m not kidding, often—gets compared to the likes of William Faulkner and Cormac McCarthy, sometimes he even winds up in the same breath as Toni Morrison. Joe Meno started publishing at a high level when he was just 24 , and 22 years later maintains a breathless pace. Head down, focused, steady as she goes. He’s a prodigy grown into a master. Think Wonder Boy’s Professor Grady Tripp, had the iconic fictional author never experienced writers’ block. 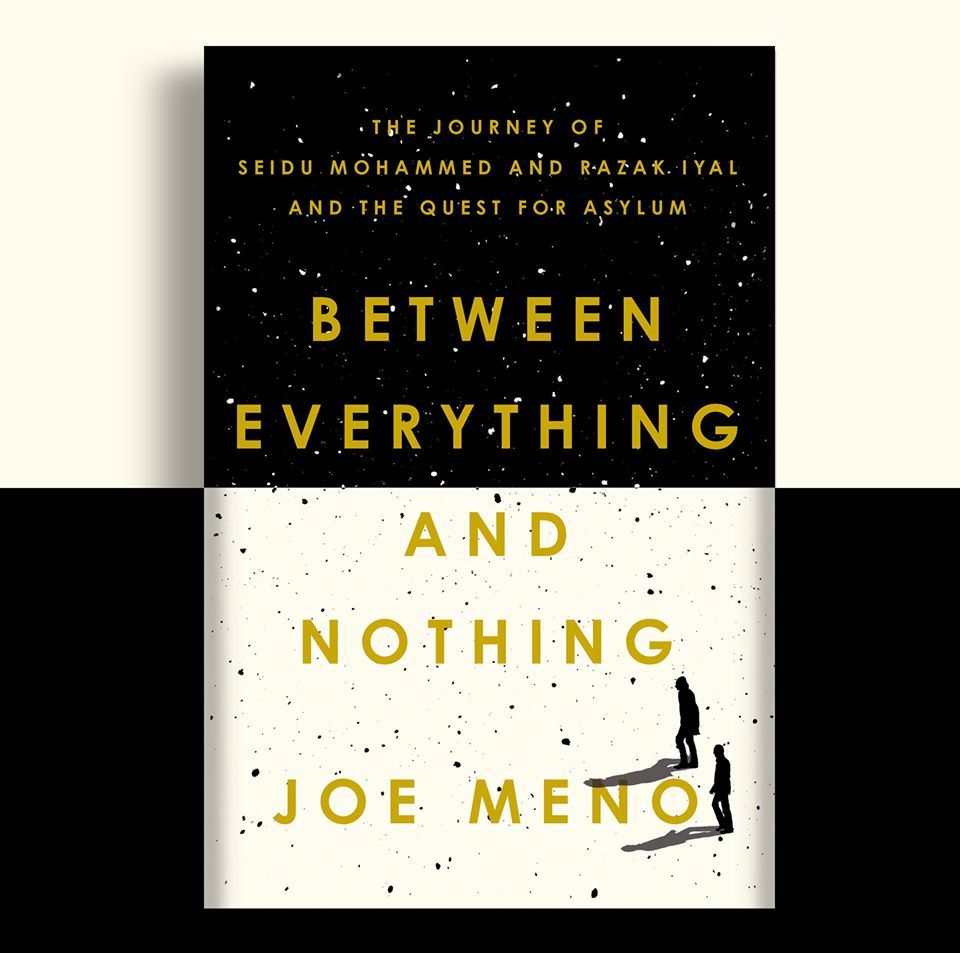 Joe’s oeuvre, until now, consisted almost entirely of fiction in its many splintered incarnations. In his new book, Between Everything and Nothing: The Journey of Seidu Mohammed and Razak Iyal and the Quest for Asylum, Joe uses the nonfiction genre to tell a story so nuanced that it defies easy characterization. Except to say it is masterful. This story is timely. It is compelling. It is essential. It pierces the heart of a problem defining our civilization.

Razak and Seidu, of the title, separately fled persecution in Ghana, but together, mostly through chance, unite to attempt the last (in a long series) of grueling treks toward safety, if not freedom. The story toggles between the immediate journey through the frozen tundra of the utmost northern United States, and the backstories of Razak and Seidu.

Razak, an entrepreneur, finds himself out of options when his politically powerful step siblings target him (all but promise his execution) as a way to steal his share of inherited property. When Seidu, a soccer star, is accidentally outed, he understands that his very existence in a horrifically anti-LGBT culture is in peril.

From these dire circumstances, Razak and Seidu separately navigate jungles and waterways; work around corrupt police officers and slimy immigration officials; succumb to or fend off numerous armed bandits; spend time in prisons and hovels; scrape and claw to move forward, knowing to turn around is an even worse option. That they both make it as far as Minnesota in itself is a miracle, and the fact that they must now escape from the United States—the United States!—inspires a wrath of empathy, anger, and shame.

What’s most striking in this story is the utter powerlessness of people like Razak and Seidu. Two fine young men, doing their best. Respectful, compassionate men. Ambitious men. Talented men. The kind of people you want your children to turn into. And yet, they find themselves in situations beyond comprehension, situations increasingly made worse because the apparatus to help such victims flounders while the apparatus to take advantage of such victims prospers.

Kirkus Reviews and Publishers Weekly have put out full, glowing reviews of the book. The New York Times Book Review also did a nice write-up, though that is behind a paywall.

Joe’s first foray into nonfiction marks another extraordinary accomplishment. This book belongs in the canon of the best immigration stories, alongside such already lauded works like Luis Alberto Urrea’s The Devil’s Highway and Dave Eggers’s What is the What.

That Joe routinely draws comparisons to the best American writers is as it should be; he’s one of them. The difference between Joe and those better-known writers is simply that they are better known. Not better. Just better known. Joe has published mostly at independent presses; in fact, Akashic Press put out seven of his ten major books. Akashic is a highly respected press, with an almost-quarter century track record discovering and publishing talented writers. But independent presses, including Joe’s current publisher, Counterpoint, lack the resources of major publishers. Akashic, for example, was founded by a former hardcore bassist and operates out of a Brooklyn can factory. A perfect fit, in so many ways, for a writer like Joe Meno who likes to experiment in form, style, genre, and subject (big presses tend to want writers to stick to what they know sells). But that comes with a lower ceiling, in terms of exposure, sales, and recognition.

The Journey of Seidu Mohammed and Razak Iyal and the Quest for Asylum is one of Joe’s big, important books. It speaks to an ongoing crisis of conscience in the United States and throughout the free world, at a time when many improvements in our immigration system are being rescinded. Reading this book, for its content, should be an act that every decent citizen undertakes. Reading this book, for its author, should be an act that every sophisticated literary person relishes.

Lincoln Square’s beloved The Book Cellar will launch the book this Friday, June 19, at 7 p.m. The event is a discussion with Joe, Seidu and Mohammed over Zoom. Pre-registration is required:

Purchase your book in advance through The Book Cellar.

Donald G. Evans is the Founding Executive Director of the Chicago Literary Hall of Fame. He is the author of a novel and short story collection, and editor of an anthology. His personal blog often explores Chicago literature, including a recent post on his new book buying spree.