In 2010, I had one of the luckiest breaks of my professional career. I was fortunate enough to win a Timuel D. Black Jr. Fellowship, which allowed me to complete a book at the Carter G. Woodson Library on the South Side of Chicago.  I knew little about the man in whose name I received the fellowship, other than that he was still alive. When I began to research more about him, I was absolutely dumbstruck. Dr. Black (and I always called him Dr. Black) had the most intriguing life I had ever read about. He was literally like Forrest Gump – with one crucial caveat.  While Gump accidentally seemed to find himself engaged in pivotal moments of twentieth century American history through sheer accident, Dr. Black inserted himself in critical times in the history of Chicago and our nation with agency, intelligence and frankly, bravery. 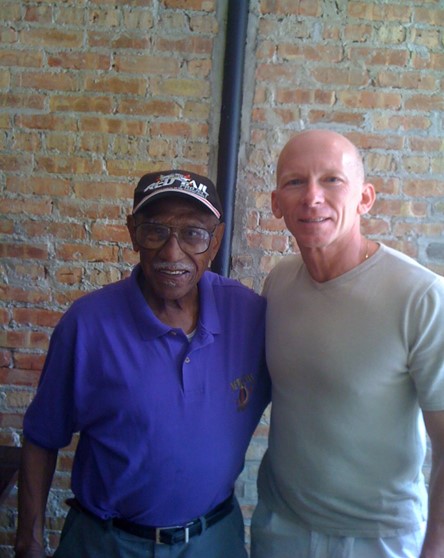 Dr. Black’s family migrated to the South Side of Chicago from Alabama only one month after the catastrophic race riot in 1919. His family was part of the first wave of the Great Migration. While attending DuSable High in the early 1930s, his fellow students included Nat King Cole and John H. Johnson, founder of the Johnson Publishing Company. As a young man, Dr. Black knew everyone associated with the big band and jazz scene of the 1930s and 1940s. When he would reminisce about these musicians, I attempted to the best of my ability to not have my mouth fall open. During World War II he served his nation participating in the invasion of Normandy and the Battle of the Bulge – and the liberation of the Buchenwald concentration camp. In asking about this pivotal event of his life I treaded lightly, knowing that it literally transformed his purpose. You could see in his eyes the horrors of what he witnessed but also the conviction that he must use his life to do good and make the world a better place for all people.

Dr. Black played a key role in the civil rights movement, particularly in Chicago. He worked with many of the most prominent nationally significant members of the movement, including Paul Robeson, A. Phillip Randolph, W.E.B. DuBois and Martin Luther King, Jr.  In fact, Black was responsible for organizing the first major speaking engagement of Dr. King in Chicago.  He organized thousands of Chicagoans in traveling to the March on Washington in 1963 and marched with Dr. King during his stay in the city in the summer of 1966.  A prominent member of the Chicago Freedom Movement, Black also took on Mayor Richard J. Daley’s Black political machine on the South Side in the 1960s, several times running for political office. He helped organize the remarkable voter registration campaign that helped get Harold Washington elected as the first Black mayor of Chicago and served as a mentor and confidante to future president Barack Obama.

This is an exhausting, mind-boggling list of accomplishments but it only tells part of the story. Dr. Black was also a tireless historian and a true believer in documenting the voices of the common people, and this profoundly impacted my historical career. In his two-volume set Bridges of Memory, he transcribed the voices of the first and second Great Waves of African American migration to Chicago. He literally preserved the voices of those still alive to document one of the pivotal events of the twentieth century. Shortly after his hundredth birthday, Black published Sacred Ground: The Chicago Streets of Timuel D. Black Jr.  The book of reminiscences was emblematic of who he was – the book covered his life, but it was also about the Black Chicago community that grounded and supported him and that he fought for. Dr. Black wrote the story of the people of Chicago who were often neglected.

Timuel Black was also remarkably hip. I could only dream of being as current and active as he was in his nineties and until the day he passed.  He had hopes that the Black Lives Matter and Me Too movements would bring real change to this nation. He was one of the best storytellers I ever encountered, and I remember one full day with him in the summer of 2010, never wanting his stories to end. He was a compassionate soul. He grieved greatly when he lost his only son Kerrigan to AIDS at the age of 29 and he did what he naturally was driven to do – fight for the rights and the dignity of AIDS victims.

Since his passing, I have attempted to explain to friends and family something about Dr. Black that is indescribable, and it is this. In the presence of TImuel Black I felt greatness.  Not just respect or admiration but something larger – the ability of someone to transcend their lives and to dedicate oneself to a greater purpose.  I have never had this feeling before with the exception of being in the presence of  former president Obama. Dr. Black was funny, confident, a kind and thoughtful man who could converse with anyone, an organizer, and a natural writer. He made me want to be a better man – and perhaps that is the sign of true human greatness.

Gerald R. Butters is a professor of history at Aurora University, and the author of the books From Sweetback to Superfly: Race and Film Audiences in Chicago’s Loop, Banned in Kansas: Motion Picture Censorship, 1915–1966, and Black Manhood on the Silent Screen. Dr. Butters has lectured internationally, including an address to the European Commission in Luxembourg.