On Thursday, Dec. 10 of this year, the Chicago Literary Hall of Fame will host a virtual auction—our only major fundraiser of 2020. It is, at once, a tried-and-true little road trip, and a drive into completely unknown terrain. Since 2010, our first year, CLHOF has hosted six or seven silent auctions, depending on how you do the math. This will be the first one we host remotely. 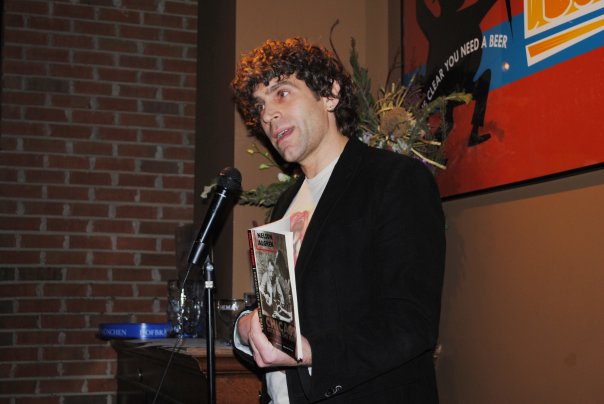 The first Chicago Literary Hall of Fame auction wasn’t even that—it was something closer to a garage sale. We were coming up fast on our first induction ceremony, which was set to take place at the Northeastern Illinois University Auditorium, and we were racking up bills: statues to hand out to family members, food and drink, insurance, designers for posters and programs, the printer, artifacts for a standing exhibit, live musicians, all kinds of little nicks and cuts we didn’t anticipate until we got into the planning. Don De Grazia and Bayo Ojikutu were there, Marcus Sakey, John Freyer—they did readings and encouraged people to bid on the donated items we’d collected. That was at Sheffield’s Pub, when Ric Hess was still going strong. We had ball caps and beer signs and books and nice pens. It was my kind of fundraiser—I should mention I love garage sales. I want to say this was in the late winter, 2010. A bunch of people rolled up their sleeves to help out, Randy Richardson and Valya Lupescu and Kathy Wolter, and a bunch of other people showed up to throw money into the pot.

After that, we moved the silent auction fundraisers to the Cliff Dwellers, then Hilton/Asmus Contemporary, Haymarket Pub & Brewery three or four times, and 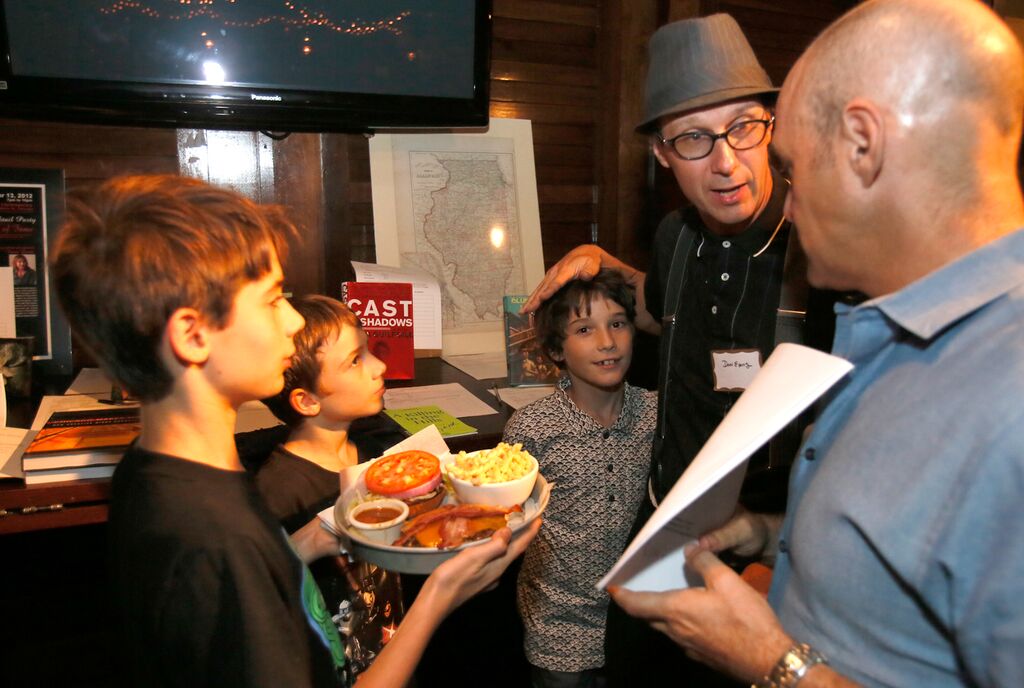 a couple years ago JoAnn Fastoff’s penthouse party room in Hyde Park. We recruited special guests—Janet Davies, David Eigenberg, Nora Dunn, and Peter Sagal, off the top of my head—to entice people to show up. Through many of those years, the silent auction, chaotic as it was at times, accounted for the majority of our revenue; essentially, these events allowed us to keep doing what we were doing, especially the major ceremonies, which grew to include the Fuller Awards for lifetime achievement. Always, there were board members, volunteers, and friends willing to do what they could—send out invites, donate vacation homes, give us some signed books, figure out how to take credit card transactions, and so forth. Always, there were supporters willing to come out and make the occasion festive, and profitable.

For CLHOF’s 10-year anniversary this year, a big gala was in the works. Ten years is a significant milestone, and like a lot of organizations we figured it made sense to do it right, do it big, and raise a far greater amount of money to match our far greater reputation and capabilities. But, of course, that cannot happen. It shouldn’t happen.

So we’re back to the idea of an auction, only an auction in which the booze and food, the crowds around the bidding sheets, the noise, the laughter, the general mayhem and excitement….that’s all gone.

This health pandemic has made us think seriously about how to use virtual formats to stage quality, worthwhile programs. The idea is not to replicate other efforts—which would, essentially, mean putting on lesser events—but to reimagine them.

So we thought about how we could use this occasion to do something special, something that transcends the new normal. Yes, we would use Zoom, but how could we do it in such a way that gave our supporters—all of us headed into perhaps the most painfully dull, isolated winter of our lifetimes--something to cherish?

It starts, I think, with a philosophy. Ours: keep it simple and make it fun. Though the format has changed, the underpinnings are the same: we want to collect as many quality items as possible, put them up for bid, and then get those who know us (or want to know us) (or just need to get in on the action) to participate. We want everybody to come as stakeholders in Chicago’s literary culture; we want everybody to leave thinking they did us and themselves a favor.

It starts with the hosts. Brian Hieggelke and Elizabeth Gomez are two super smart, impressive, articulate, passionate and entertaining individuals, and our 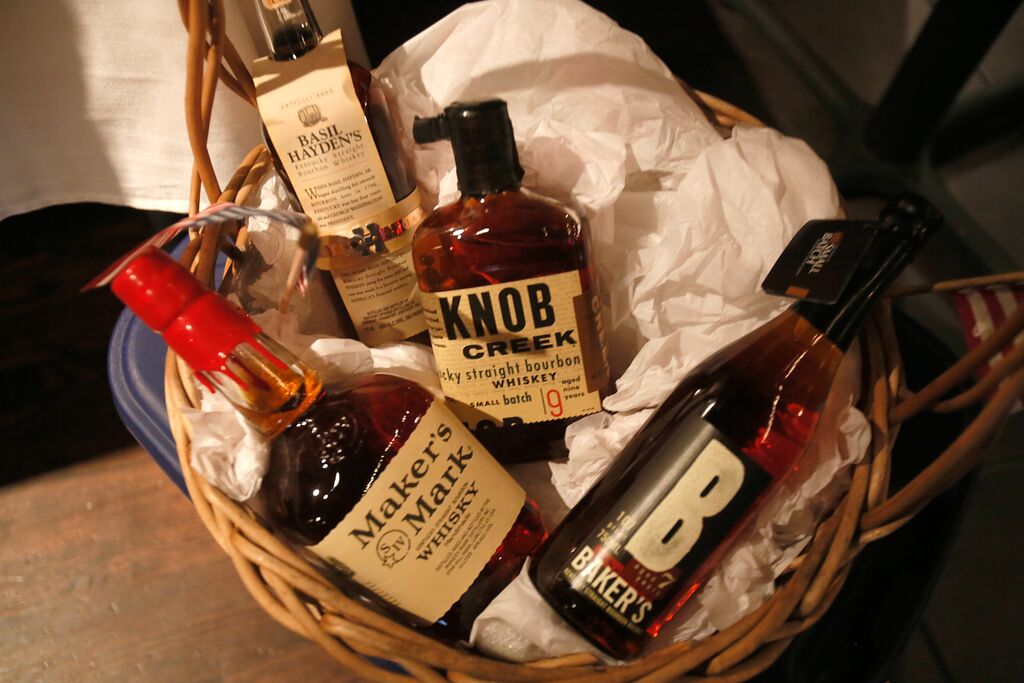 experience is in their capable hands. Then comes the auction catalogue. While we’re still collecting donations, we already know that we’re able to list a wide range of pandemic-friendly packages that offer opportunities like Billy Lombardo reciting poetry under your window, Rebecca Makkai giving you an Hungarian Gypsy card reading, George Rawlinson leading you and friends on a personal Chicago history tour, Randy Albers critiquing your manuscript, and so much more. Then there is the entertainment value, and for that we’ll have several extraordinary Chicago authors doing short readings, specially-made videos highlighting CLHOF activities, a short trivia round, three live auctions, and even a raffle.

No, there will be no open bar, nor will there be the chance to huddle together and swap stories, business cards, or ideas. No, there won’t be cute delicious little appetizers passed around on trays. No, there won’t be any selfies with the likes of Peter Sagal or Nora Dunn. But, yes, it will be an evening that allows us, under the circumstances, to come together, to support a good cause, and to have a bit of fun. This is our community, and we’ve inherited the responsibility of keeping it intact while keeping us all safe. It should, and I think it will, feel like a night out, even if you do it from in. Besides, there is nothing stopping you from being the winning bidder on something like a whiskey basket, which you can take home to social distance the night away.

Stay tuned for more details in coming days and weeks. If you'd like to donate an item for our auction, or be a matching donor, contact Don Evans.