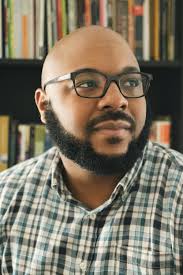 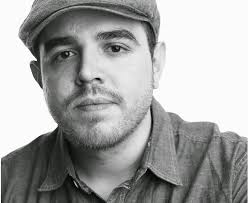 of his new poetry collection, Finna. Nate will be joined by his friend and fellow poet, José Olivarez.

This night of poetry and discussion will be on Zoom and FB live. Details are on the Volumes website. Copies of Nate’s Finna and Jose’s debut poetry collection Citizen Illegal can be purchased through Volumes (shipped or for pick up). Citizen Illegal was a finalist for the PEN/Jean Stein Award and a winner of the 2018 Chicago Review of Books Poetry Prize. It was named a top book of 2018 by The Adroit Journal, NPR, and the New York Public Library.

Nate’s Finna, which was released on August 11 of this year, is a poetry collection that reads like an autobiography. It’s a celebration of the Black vernacular, an exploration of identity, and a reckoning with all the influences, from all the places, that shape a person. It’s Nate Marshall, the poet, the human being, trying to assign language to experience, perhaps even showing language as experience, but more than that trying to revive and embrace language persistently suppressed and rejected, from within and without.

The title comes from an invented but common word, a contraction that the author defines on the book’s back cover.

Like an autobiography, each stitch of this collection carries purpose, starting with the “landless acknowledgement” in which the author broaches the subject of heredity and ownership and belonging, concluding with a line that resonates throughout the collection:

“why do you think I call my compatriots homies? maybe ain’t no home except for how your beloveds cuss or pray or pronounce.”

The opening poem, “Nate Marshall is a white supremacist from Colorado or Nate Marshall is a poet from the South Side of Chicago or i love you Nate Marshall” sets or perhaps resets a landscape in which people, like atoms, float, collide, intersect and ultimately react. In that opening poem, the other Nate Marshall is a strange kind of doppelganger, somebody, from what little the author Nate Marshall can tell, lives a diametrically opposed life. The narrator imagines, not without some understanding, this other head space, and the poem, though it might imply a kind of revulsion, does not preach or even judge. Instead, it chooses to explore. 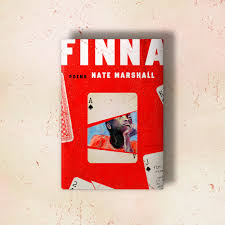 The collection is divided into four sections, each distinct yet intertwined, and each featuring poems extraordinary on their own but more powerful still as part of the larger fabric of the story.

Like Marshall’s instant classic debut, Wild Hundreds, this story is grounded on Chicago’s South Side. That first book established Marshall as a rare talent and from the first ranked among the finest poetic explorations of the city. It’s apt that Marshall be considered in the same sentence as some of Chicago’s finest poets—the inspiration to write about the city happened when he read Gwendolyn Brooks’s “Beverly Hills, Chicago.”

Nate said, “I’d never seen a poem about a place I’d actually been. That neighborhood is just west of where I grew up. I thought, ‘Shit, you can write poems about the far West Side of Chicago?’ I’d only read poems written about grand places.”

In that first section of Finna, a series of Nate Marshall origin stories weave their way in and out of poems about families and friends, other Nate Marshalls, and inevitably the white supremacist Nate Marshall confronts the author Nate Marshall, at least virtually. As the author dissects his own identity, language, in its familiarity, its creativity, its playfulness and its power, becomes the ground on which his feet are planted.

The second section, “What’s My Favorite Word?” lives in a multi-generational world that ranges from childhood to adulthood, easily blending worlds that were with worlds that are. Nate vividly captures the people and places, the sights and sounds, that make this world unique, and in the process pierces his way through philosophical studies on topics such as masculinity that both examine and depend upon language. “Native Informant,” the third section, begins with perhaps the collection’s strongest poem, “when I say Chicago.” This masterful poem encapsulates the supreme craftsmanship of the whole collection, an unsentimental anthem about “a town in love with its own blood.” In that poem and that section, Marshall’s even rhythm and pacing bely an intensity that neither glorifies nor apologizes, but rather lays out the conditions that surround and comprise and contribute to a sense of community. The final section, “Finna,” comes full circle, the most hopeful, forward-looking poems that bare all the fruit of the earlier poems. The other Nate Marshall, as he’s done throughout the book, makes another appearance, and in a concluding poem the author clarifies and connects the collection’s title to its substance. “That last section, I was thinking about the personal level, what that looks like,” Nate said. “The historical level, the national level, what that looks like. It’s not going to be linear. It’s not going to be simple.”

The collection, ultimately, is a thoughtful and insightful examination of a society working for and against harmony and justice. Its focus on a single Nate Marshall among so many other Nate Marshalls, including the white supremacist Nate Marshall, acts as a device to introduce and welcome conversation and introspection about uncomfortable realities. These crisp, melodic poems bear witness to the Black vernacular’s enormous influence on pop culture and serve as a living example of its power as a tool of storytelling and survival. From the advance material for the collection, “These poems consider the brevity and disposability of Black lives and other oppressed people in our current era of emboldened white supremacy, and the use of the Black vernacular in America’s vast reserve of racial and gendered epithets. Finnaexplores the erasure of peoples in the American narrative; asks how gendered language can provoke violence; and finally, how the Black vernacular, expands our notions of possibility, giving us a new language of hope.”

In our recent conversation, Nate talked a bit about race, specifically conversations around race. He said, “We don’t often take other people seriously who don’t agree with us. We often consider those who have views antithetical to ours unserious. It doesn’t serve our actual goals, but also kind of makes that stuff more powerful. Don’t distract from the point. When people have these points of views that are monstrous, there is a tendency to think they are monsters; it lets them off the hook and lets us off the hook in a way. When we say a person is a monster, we are saying there are no environmental factors that shaped who they became. We also don’t get to implicate ourselves.”

He also said, “I do think at some point one way or another we are going to have to stare down these ways in which we deeply disagree and figure something out--or just perish.”

Nate and José will have a chance for much more expansive conversation Thursday night, especially about his new collection. In addition to his first two poetry collections, Nate co-edited The BreakBeat Poets: New American Poetry in the Age of Hip-Hop. He is a member of The Dark Noise Collective and co-directs Crescendo Literary. He is an assistant professor of English at Colorado College.

José is the son of Mexican immigrants. Along with Felicia Chavez and Willie Perdomo, he is co-editing the forthcoming anthology, The BreakBeat Poets Vol. 4: LatiNEXT. He is the co-host of the poetry podcast, The Poetry Gods. In 2018, he was awarded the first annual Author and Artist in Justice Award from the Phillips Brooks House Association and named a Debut Poet of 2018 by Poets & Writers. In 2019, he was awarded a Ruth Lilly and Dorothy Sargent Rosenberg Poetry Fellowship from the Poetry Foundation. His work has been featured in The New York Times,The Paris Review, and elsewhere.

Join Nate and José for this special Volumes Bookcafé discussion this Thursday, starting at 7 p.m.

Dial by your location