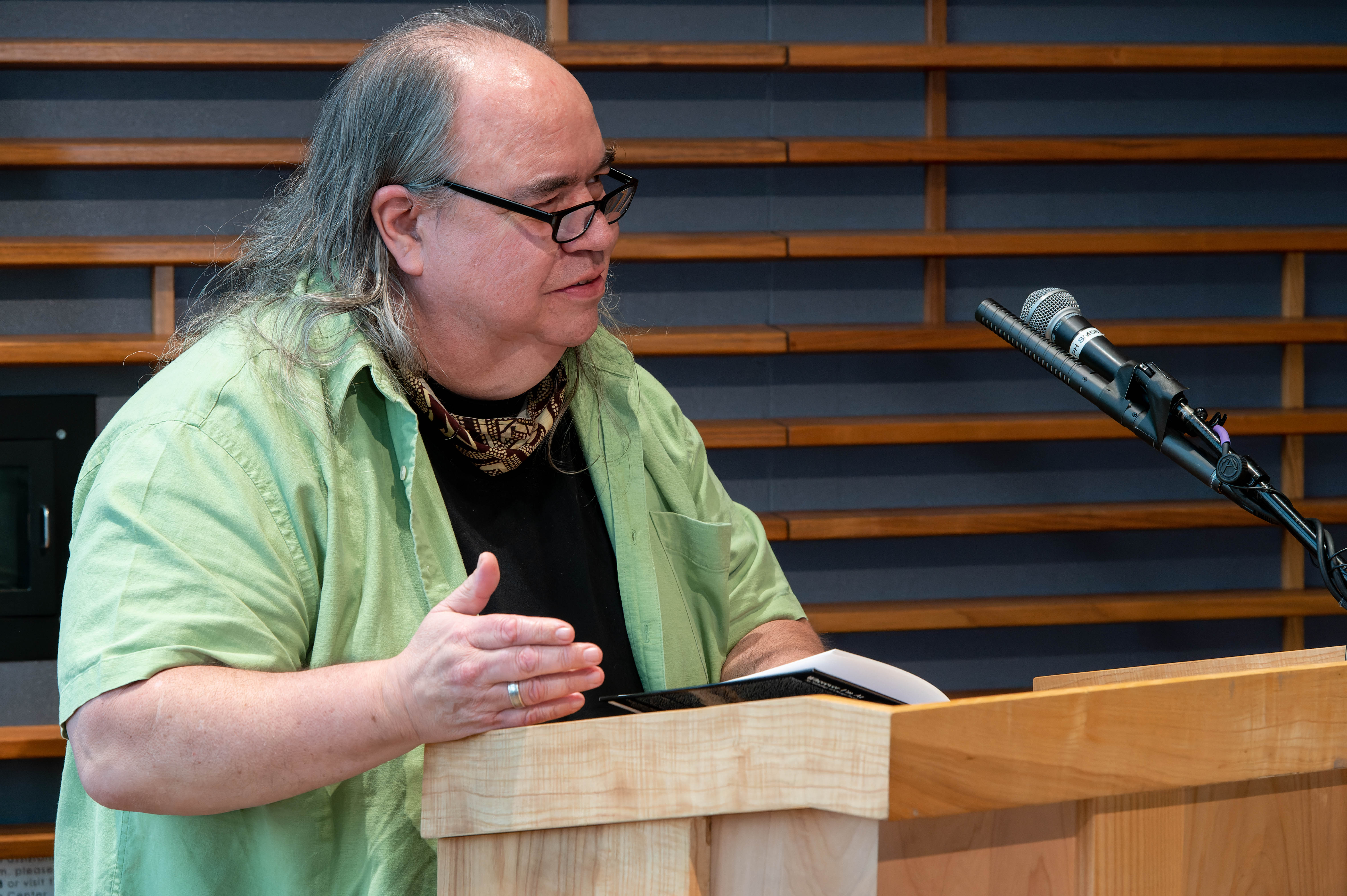 Chicago is a city rich with identity, stemming from its long and complicated history and the multitudinous people who have populated it. In Wherever I’m At: An Anthology of Chicago Poetry, various poets from different backgrounds and literary styles ruminate on the Windy City, often mingling their own individual identity with that of Chicago.

Poet Mark Turcotte (author of “Hawk Hour,” the final poem in the anthology) seeks to imbue his own poetry with a unique identity and how that intersects with the world at large.

“I feel like the world is filled with art and poetry, and all I have to do is look carefully enough to see it,” Turcotte says. “Of course, there’s no way that who I am doesn’t interfere, interject, or intrude on it in some way.”

Turcotte is a Native American poet who grew up on the Turtle Mountain Chippewa reservation in North Dakota. He moved to Chicago in the 90s after he had completed his education and started his poetry career. After a brief stint outside of the city, he now lives in Chicago and teaches at DePaul University.

While it is not the only aspect of identity that defines his work, Turcotte acknowledges being Native as an important part of his poetry. This is especially present in “Hawk Hour.”

“To me, there is a cultural obligation to acknowledge a hawk in the sky,” Turcotte says. “But I know lots of people who love hawks … who aren’t Native who might have looked for even longer than I did.”

“Hawk Hour” describes a speaker’s journey as they move past various Chicago landmarks, continually noting the unnatural feeling of the city, which eventually culminates in the sight of a hawk soaring overhead.

“My grumpiness about comparing the city to nature is rooted in my Native experience,” Turcotte explains. “I live a block away from Lake Michigan, but somehow I’m not connected to it … that becomes this premise [of the poem] that I work with.”

In Turcotte’s opinion, identity is a critical component in poetry. Whether a poet acknowledges it or not, they have a unique identity which affects the creation of their poetry. As well as that, Turcotte also feels identity is an important part of modern American politics.

“It’s people who have never had their identity threatened or questioned who tend to think that identity is not a big deal,” Turcotte says. “I sort of had a taste of what it’s like to operate in America being looked at as a white person, so I know the difference.”

Not only does “Hawk Hour” explore themes of nature in the city, but it also briefly alludes to the violence that certain underprivileged neighborhoods face from police.

“That stuff [racism] was just kind of built in for me because of my own experience … sometimes I’ve been very Brown in America,” Turcotte says. 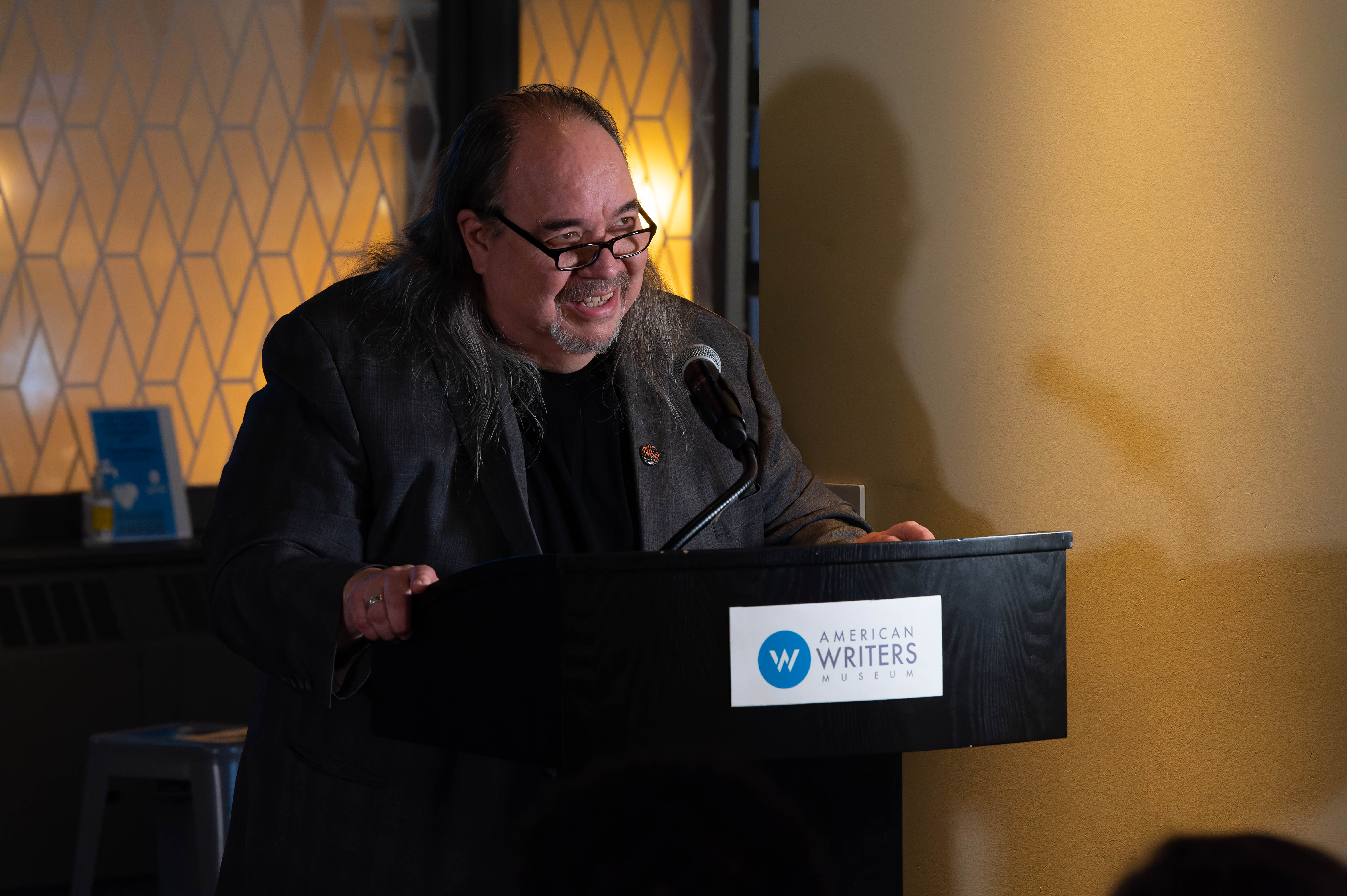 Within all of these features of the poem, Turcotte explores the way in which his identity and background collide with Chicago. With the combination of such a richly nuanced background and city, the result is an evocative poem that closes Wherever I’m At on an emotional note.

Turcotte feels his poetic identity has changed in its relationship to Chicago itself.

“[In the 90’s] I never felt like I much belonged in Chicago’s Native community,” Turcotte explains.

However, with rising knowledge of the displacement of Native American tribes, as well as an influx of Native artists (including E. Donald Two Rivers and Andrea Carlson), Turcotte feels Chicago’s Native community has changed.

“There’s more awareness [about Native culture] … I think it has something to do with the younger generation of twenty-somethings, thirty-somethings,” Turcotte says. “[Awareness] can make you feel much more welcome in the city. It has raised the consciousness of everybody, including me, of how important this area was and is to the Indigenous Peoples.”

And so even beyond his poetry, Turcotte’s identity as a Native American seeps into that of Chicago’s and changes with time. In this sense, the poetic power of the city lends itself to the vast array of people within it.

Turcotte maintains that identity is an important aspect of poetry in general.

“I think everyone’s identity is in their work whether they know it or not … I’ve had some students tell me, ‘I don’t really have a bio’. Really? You didn’t grow up somewhere? You didn’t come from some people or a neighborhood?”

Brian Clancy is a senior in English at DePaul University. He recently completed an internship with the Chicago Literary Hall of Fame.