Let Us All Improve Our Russian

I have deep connections to Eastern Europe. I’m a dual citizen, qualified for Lithuanian citizenship because my parents and grandparents are displaced Lithuanians. During WWII, they fled Russian occupation and the strong likelihood of execution or deportation to Siberia, where Russia had set up labor and prison camps. My elders landed in Cicero, Illinois, whose manufacturing jobs, affordable housing and ethnic parishes drew massive numbers of WWII refugees. Most of the adults I knew in childhood had experienced something similar to what Ukrainian refugees are experiencing now.

Beside Lithuania, I am closer to no European country than to Ukraine. I was married for 19 years to a Ukrainian woman, have spent over twenty summer months of my life in Kyiv or Odessa. My new wife, raised in Klaipėda—her father Russian and mother Lithuanian—volunteered to transport humanitarian aid to Ukraine in 2014, when Russia’s invasion actually began. She has introduced me to people from Zhytomyr and Donetsk, including children orphaned during Russia’s assaults on Donbas. In 2019, we spent time with them on their holiday excursion to a Baltic Sea resort, organized by volunteers my wife knows. 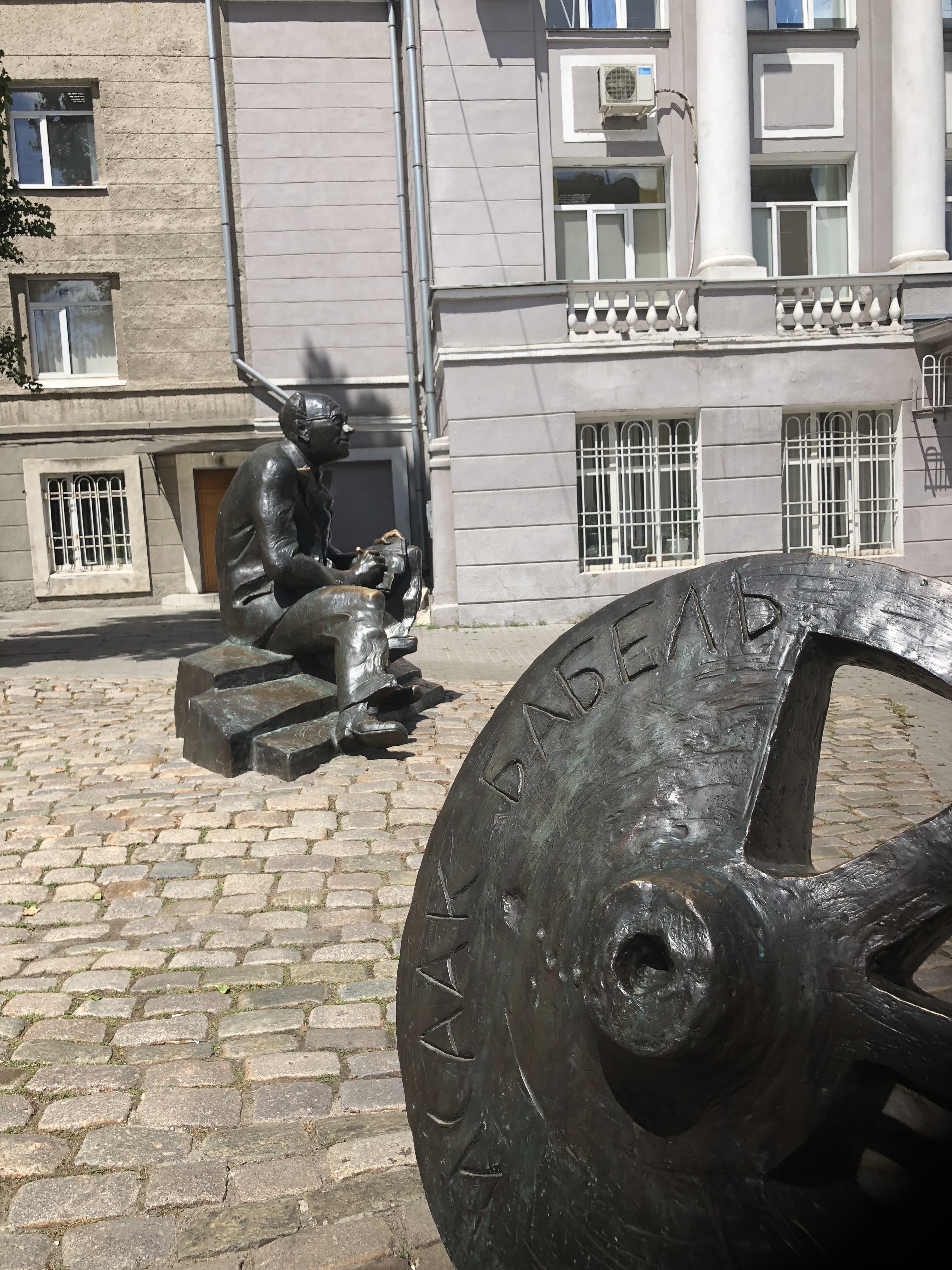 Proximity to these cultures has led me to meet dozens of Russians. I have close Russian friends. Centuries of Russian occupation and re-occupation, intermingling, commerce, wars and migration have left large numbers of Russians in the Baltic States and Ukraine. Finding them in Odessa or Klaipėda is as ordinary as finding Mexicans or Poles in Chicago. Anyone who spends time trying to get close to Ukraine or Lithuania stands to meet a Russian, though it may not be obvious when it happens. In many cases, these Russians won’t feel any need to point out their ethnicity. I had known two men for years before I learned they identified as Russian, though neither held a Russian passport, and neither had any desire to move there. Of course, they spoke Russian fluently.

So does my wife. She spoke Russian in her father’s family, Lithuanian in her mother’s. Because her father is Russian, her surname is a Russian word for an occupation—one about as common as Baker or Miller would be in England—a signal of her ties.

Those ties are nothing exotic. My surname also signals them, albeit more subtly. I use a pen name, Aras, but my legal surname is Žukauskas, quite common in Lithuania. Its root, however, is Жук, or Zhuk, the Russian word for beetle. A Russian I knew in graduate school called me Zhuk more often than he used any of the names on my identity documents. He’d tease me to say someone from my family lineage arose from beyond the Ural Mountains, where an empire of beetles lived in the Russian steppes. “You need to improve your Russian, Жук,” he often repeated. “You’re betraying your family roots!”

Eastern Europeans spend a lot of time on family roots. Photo albums can reach back into the 19th century, and few things will be as valuable as the single snapshot of a great great grandmother or the portrait of an ancestral nuclear family (often next to a corpse). People keep boxes of their ancestors’ letters and documents, sleeves of baptism and confirmation records, even pouches of dirt or pebbles gathered from some field that had been part of some farm, lands ancestors had cultivated, lost as so much land has been lost over the history of Eastern Europe.

Family history in Eastern Europe is a story of war. While plenty of families have stories of grandfathers and great uncles who became soldiers or partisans, only the rarest family is free of ordinary citizens who either had to flee, bunker down, fight or deal with their dead. I know stories of infants buried along roadsides. As a child of about 11, I was visiting a friend when his mother received a letter from Lithuania that confirmed, after 40 years, that her brother had, in fact, died in a train along the way to Siberia. Over those four decades, my friend’s mother, the only surviving member of a family of seven, had never known his fate, if he was in a prison camp and unwilling (unable?) to write, or if he had been executed, worked to death or fallen ill. Having read the letter in minutes, her reading glasses crooked on her nose, she held the air mail envelope and bluish paper against her belly, pain exploding from her like magma through the hardest rock. That night, the family set a dinner table with an extra seat, one for the dead, and ate in absolute silence.

This is one story. Every Eastern European family has dozens, possibly hundreds, if they’ve managed to keep track of five or more generations of friends and 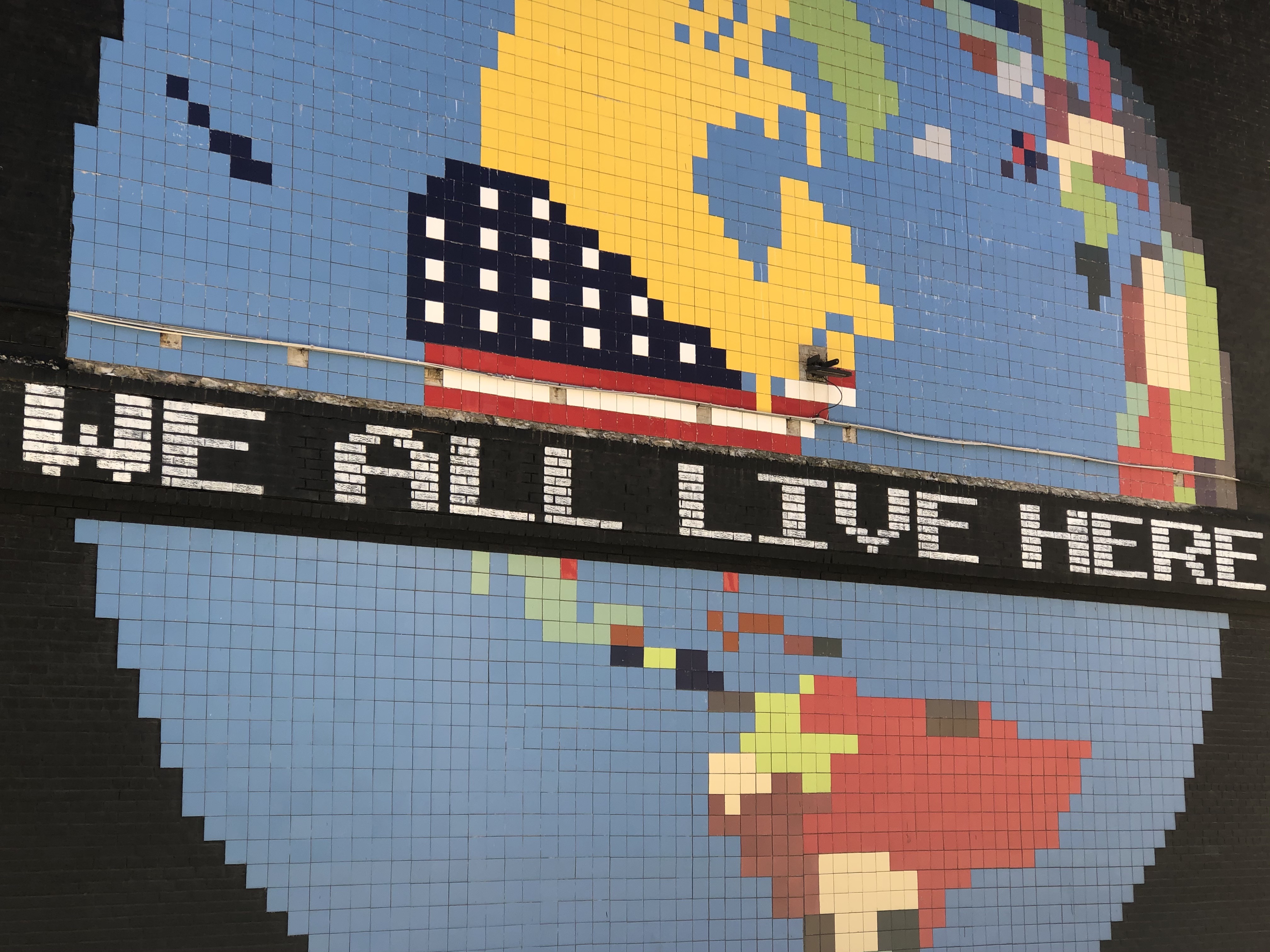 relatives, a daisy chain of invasions linking back to times when officers still wore swords. Now they’ll have even more, as the war in Ukraine is not, from the point of view of anyone in Eastern Europe, something happening “over there,” on the other side of NATO’s borders. It’s happening right now to virtually every Eastern European, on one level or another, though it is personal to all but the most flippant imbecile.

The front lines are in Ukraine, and Ukrainians are telling Russian warships to fuck right off, fighting for a world not sufficiently aware that by attacking Ukraine, Russia attacked the world. But the broader impact of this war presses the chest and twists the guts of virtually every Eastern European. All of us know how long war lasts. Everyone involved, from those fleeing, to those in bunkers, manning Javelins or ambushing convoys—those taking in refugees, transporting them around Europe, donating money and medicine, or tracking their relatives and friends—all of these people grew up knowing that wars don’t ever end. Perhaps the shooting ceases, but inside you and among your loved ones, war’s relentless toll carries on. Yes, it transforms, and its intensity dissipates, yet the mark on the mind and emotions—in many cases, on the body—never goes away. For as long as the family survives, no matter what shape it takes, the war will remain, its energy passed from one generation to the next.

My children live in America because their paternal grandparents fled a war. The next time they see their maternal grandparents…if they ever do get to see babushka and diedushka again…the couple will have either fled their home in Ukraine or bunkered down to survive, as they cursed this war’s senselessness and brutality. The grandparents who lived before the war are gone. A war’s survivor is forever a person who survived a war.

This is perhaps the most baffling part of the deviant atrocity Russia has unleashed. Russians know themselves. Just ask them. At their best, they are romantic and passionate, intensely thoughtful, sociable and gregarious, traditional yet lively. I know no other culture whose dinner parties can become orgies of recited poetry. A foreigner among them is bound to hear some Russian go into rapture over the beauty of the Russian language, the complexity of its expressions, so deep and brilliant that no other language compares. These self-exaltations are early shades of Russians at their worst: self-absorbed, inflexible, paranoid, conniving, fake, reckless, their superiority complex projected over unfathomable inadequacy. Russia knows a lot, but it knows little as well as it knows war. Like the rest of Eastern Europe, Russia knows it has no end. This is written in their poetry, their great stories and sprawling novels, just as it is in their bones, in the memories of Russian mothers, and in the earth they scorched while retreating from Nazis.

Now Russia claims, straight-faced before the whole world, to be punishing Nazis for harming Russian speakers. In reality, every single bomb fallen on a human in Ukraine has fallen on a Russian speaker. Most Ukrainians are bilingual. There is no villager in Ukraine who could not insult invading Russians in all the flair of Russian obscenities. Mariupol, the city Russia seems intent on vaporizing, is home to people who speak Russian first, Ukrainian second, if at all. The blast of any bomb dropped on any school, apartment complex, theater or children’s hospital is bound to hit a Russian speaker, possibly one who identifies as Russian, who has family in Russia, perhaps aunts whose sons are driving tanks now in the sights of Javelins. 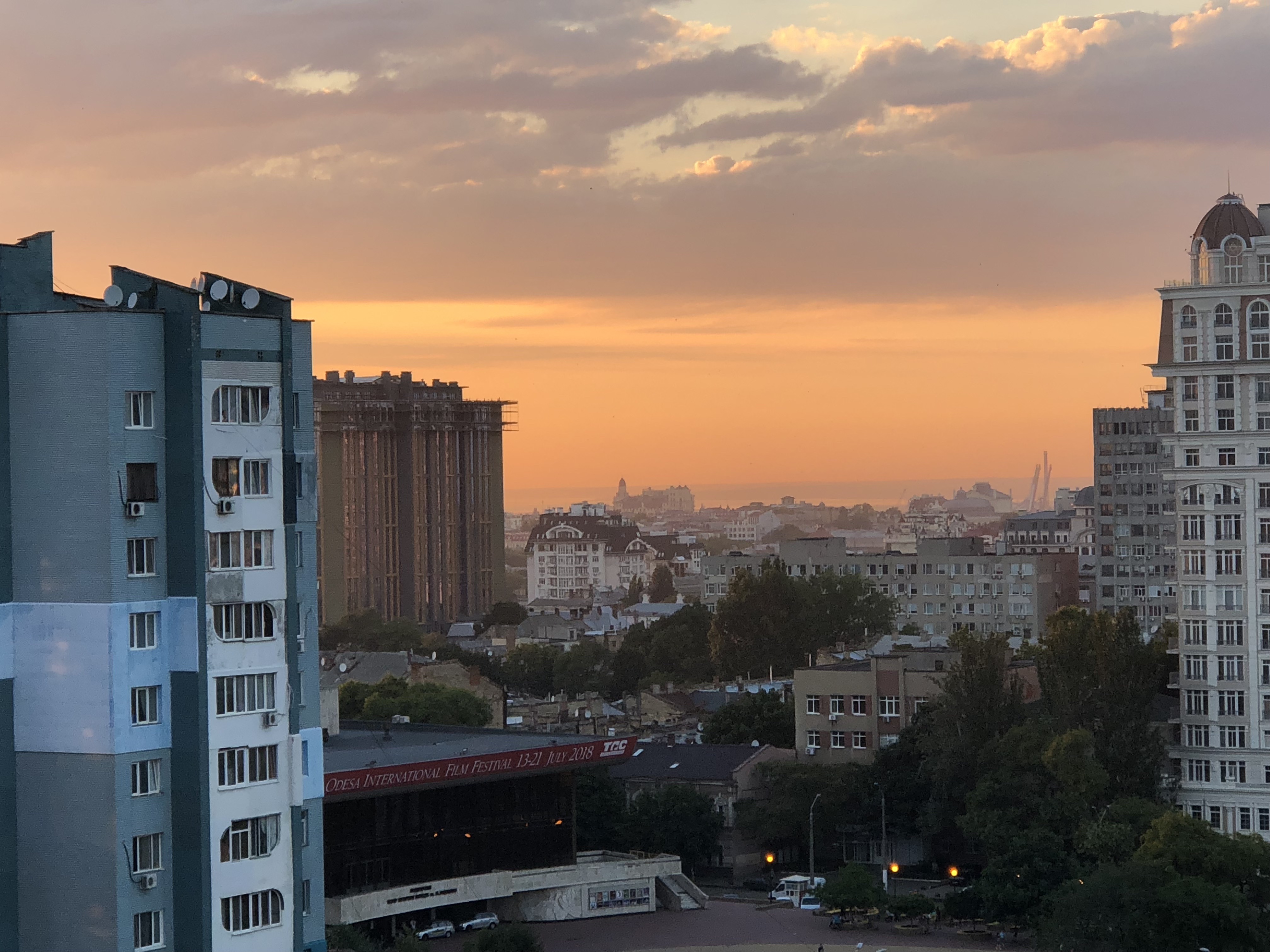 Its insanity would be, in fact, what it is: at once sadism and masochism. Russians citizens cannot end this atrocity, the story goes, because the repression against them is too great. One peep and they end up in prison, beaten along the way, only to get out to find their businesses ruined and families threatened. Yet Russia’s cycled down this path before, and it has only ever led to one end: enormous suffering for Russia’s neighbors alongside enormous suffering for Russia. Czar Nicholas I put down dissidents, involved Russia in two expensive wars, and the Crimean War tanked the Russian economy. Nicholas II committed democide, killing between 900,000-1,500,000 Russians. Stalin sent mostly Russians to the Gulag. The Soviet Premiers of 1979-1989, Brezhnev and Andropov among them, pressed on in Afghanistan, draining the Russian economy. Now Putin presents his purely diabolical path, daring us to test if he’s actually willing to trigger a great extinction.

It doesn’t matter if your surname has a Russian root or if it’s an actual Russian word. Right now we are all tied to Russia, to its petulant desire to be powerful and important, taken seriously and guaranteed safety, from countries that to date were only interested in buying its gas and selling it microchips. We are tied by the tension between our desire to live and our fear of those willing to keep us from living if they don’t get what they want. Russia has risen out of this tension to become the world’s bully. In a flash, a confused and bored world has something to believe in, an example of intrepid courage in Ukraine, and something to stand for, just as there is absolute evil to resist. It should scare us that we need evil in order to feel oriented, as we get to see the clarity of how evil works. It does not relent, cannot find the heart to spare children or listen to anyone from outside.

So, let us improve our Russian. Let us ask the obvious question that is several centuries overdue: could Russia appeal to its passion and intense thought to stop replacing its Czar with a Premier, its Premier with a President, mere synonyms for evil despots? Could Russia look itself in the face today and admit that it is not saving Ukraine from Nazis or conducting any special military operation? While threatening the world with suffering and catastrophe, brutalizing its neighbor for having the audacity to ask for divorce, Russia embarks on the certainty of its own collapse, damned henceforth to know it proved to the world that it can slaughter children. For what? What are the gains worth compared to the losses?

Any question regarding war posed in Eastern Europe is rhetorical. It’s a trauma that displaces, perpetually fixing anger, grief and pain into the soul. It simply 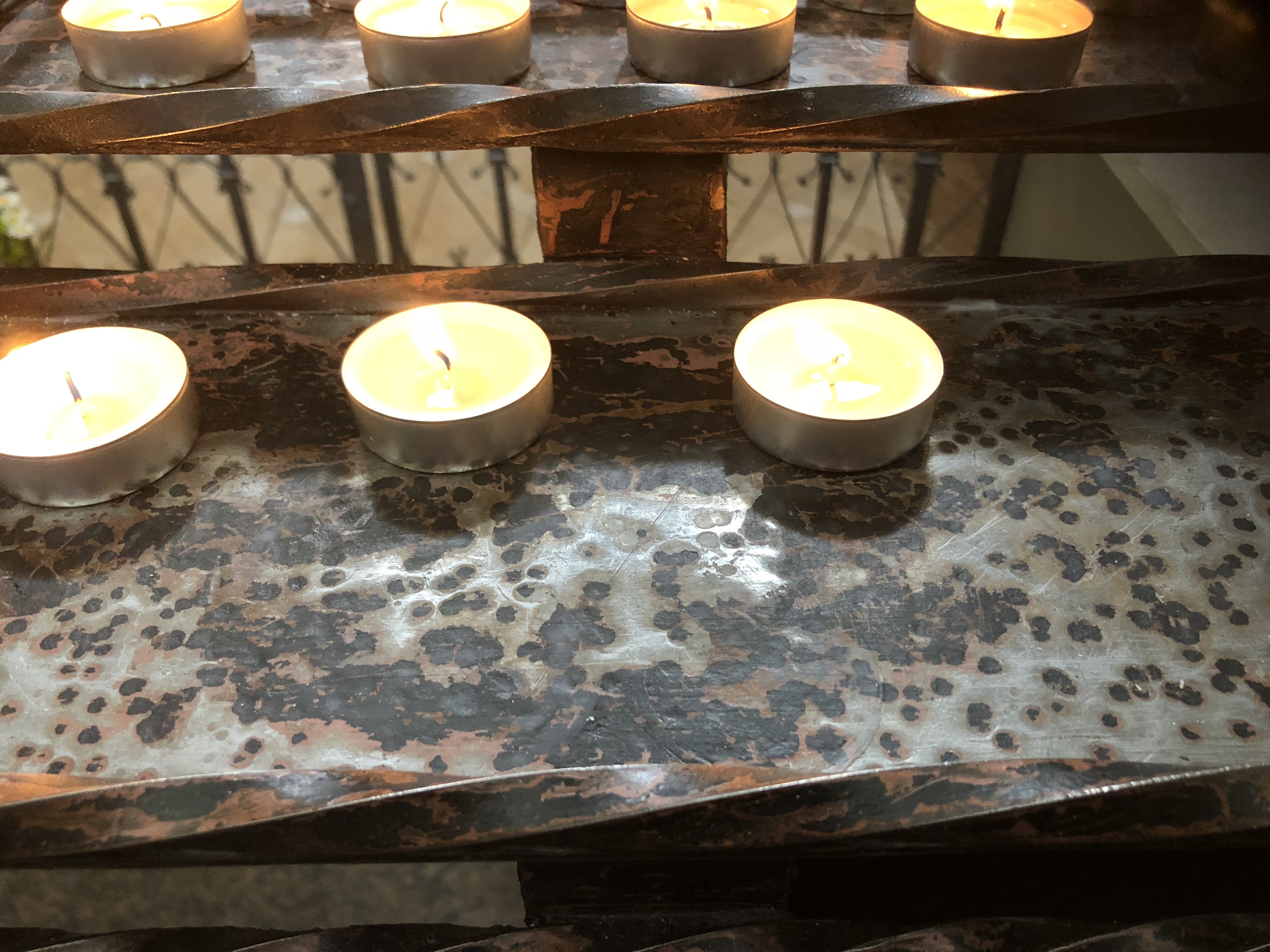 I propose asking a question, and doing it in the best possible Russian. It is not yet rhetorical, though the longer this war rages, the closer it gets to becoming so. In the face of this sick rationale for war, of these images of bombed hospitals and homes, people slaughtered while trying to flee, conscious attempts to kill children, women giving birth in the subway, I pose to you, Россия, ты кто? Russia, who are you? Who’ll answer that question? When will they do it, what will they say, and to whom?

Gint Aras has been trapped on planet earth since 1973. He’s the author of two novels, The Fugue (Tortoise, 2015) and Finding the Moon in Sugar (Infinity, 2009), as well as the award-winning memoir, Relief By Execution: A Visit To Mauthausen. He splits his time between Klaipėda and Chicago.