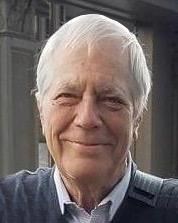 During a career as a journalist who covered major social movements, a teacher, and a nonprofit executive dedicated to telling the story of grassroots groups, Henry W. DeZutter was also a creative soul who wrote a children’s book. Mr. DeZutter passed away in Chicago on July 14. He was 80 years old.

Oh, to hell with it. I can’t do this. Henry was my friend Hank, so a traditional obituary lead lands way outside of the strike zone.

Hank’s career reflects the influence of his friend Studs Terkel. Like Studs, Hank was also a storyteller who listened acutely to people. He knew that the stories of people in underserved communities are as urgent as coverage of the high and mighty who have dominated the news since the very first breaking story about a big-city mayor who scratched his nose.

Full disclosure: I worked with Hank at the Community Media Workshop (now Public Narrative), a nonprofit organization in Chicago he co-founded with activist and editor Thom Clark. I wrote, and Hank edited, a news service for seven years that covered the work of Chicago activists, community organizers, and nonprofits.

Hank reported for the Chicago Daily News during the 1968 Democratic convention and riots in Grant Park. He also helped launch the Chicago Journalism Review, which shone light on police tactics during that turbulent era. More than 25 years later, Hank wrote what many believe was the first long-form story about Barack Obama (for the Chicago Reader).

As a friend of Hank’s, I cherished some of the same things about him that he found in his career and life – the quirky shared moments that fall between the lines, the little stories that are closer to my heart than to the headlines.

Late-breaking news: Hank and I once ditched a deadline for four hours so we could take the Red Line train from downtown Chicago to the Addison stop and go to Wrigley Field for a ballgame. When I dropped off an assignment on a floppy disk to Hank’s house in 1991, he surprised me with a beer and a rack of ribs; sadly, that did not become a standard editorial response to writers delivering a story in Chicago journalism or the nonprofit world. Hank and his second wife also hosted parties in Michigan that were a fusion of Chicago-based media, nonprofit types and other disreputable characters who eagerly showed up for a feast, music, and many other stimulants.

Later, three people have told me that Hank once fell asleep during a wedding reception. (OK, it was my wedding. My guess is that just this one time my friend’s curiosity was halted by temporary hearing loss caused by a few garrulous storytellers). Years later, Hank wrote a lyrical poem to celebrate the birth of my youngest kid.

I will provide a few facts about one of these memories. At the ballgame, Greg Maddux of the Braves beat the Cubs at Wrigley Field that day, painting a complete-game, 78-pitch masterpiece in the sunshine. Art, I  have learned, is best appreciated with a beer in your hand and a friend by your side.

Hank and I met our deadline later that day.

I never heard many of Hank’s stories about the 60s or any other era. More than five decades later, he did tell me over dinner with him and his wife Barbara that he once welcomed members of the radical Weathermen group into his Chicago home, giving them a place to crash in exchange for an interview. I asked him why he hadn’t shared that nugget with me during the 33 years of our friendship. He shrugged. It wasn’t so much that Hank was humble or not humble, but that he was more focused on the  movable feast in front of him than in boasting about his resume or LinkedIn profile.

Hank lived in the moment, and I try to remember that in these times. I  think the loss of a friend has been especially powerful for many of us at this utterly fragile moment in our world.

Upon reflection, there are many things I learned from Hank that I would share with anyone. One is that when you have a chance to go to a ballgame with a great friend and colleague on a work deadline day, consider all your options.

Then get the job done! Meet your deadline!

But first, take the Red Line to Addison and go to the ballgame.

Dan Baron is a writer who has worked as a journalist and columnist, communications consultant, strategist, and grant writer. His email address is dan@danbaron.com.