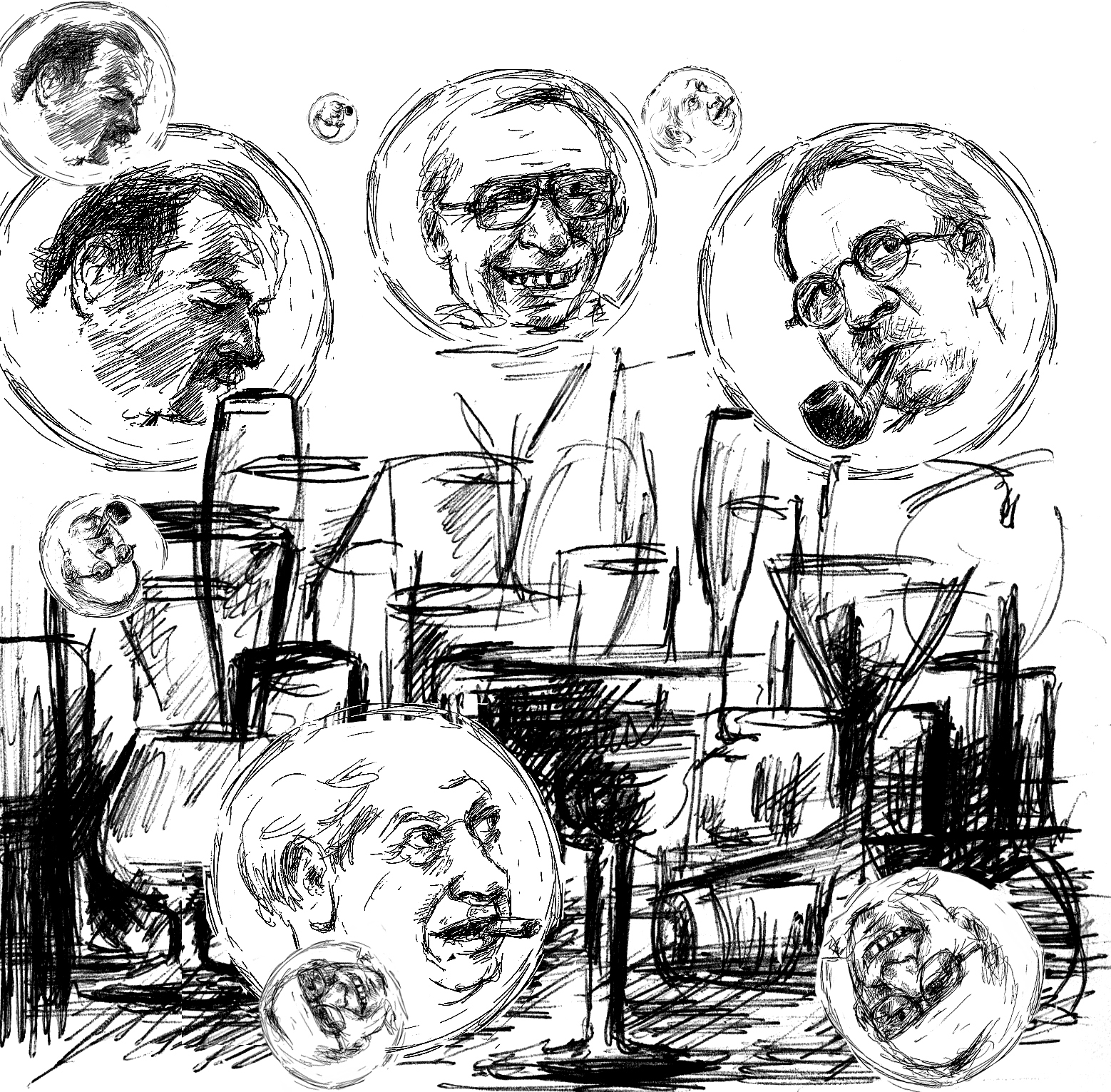 Strong associations between drinking and writing, for better or worse, continue to be the stuff of legend, especially in Chicago. Hard drinking literary heroes like Ernest Hemingway (not to mention Terkel and Royko etc. and etc.) earn much of the attention, though more polite imbibement also populates the literary landscape. Here, there are a variety of regular live lit programs, such as Reading Under the Influence (at Sheffield’s) and The Drinking & Writing Theater (at Haymarket Pub & Brewery) that celebrate literature, drinks in hand.

For Sterling North and Carl Kroch's recipe collection, So Red the Nose, Oak Park native Hemingway contributed a cocktail named for his book, Death in the Afternoon, adding at the end, “Drink three to five of these slowly." Chicagoan Edgar Rice Burroughs contributed "Tarzan Cocktail" to that same recipe book. Raymond Chandler, a Chicago native, mentions a Champagne Cocktail in his masterpiece The Big Sleep. F. Scott Fitzgerald, who modeled a variety of his characters on well-heeled Lake Forest friends he made on several visits during his Princeton days, calls out the Gin Rickey in his novel, The Great Gatsby.

We could not learn and drink all of these in one night—for obvious reasons—but on Friday night, Jan. 29, starting at 7 p.m., we got to a couple. Via Zoom Webinar, this evening was a combination cocktail party, bartending seminar, and plain old excuse to have a real weekend for once. Those who registered in advance received a small pdf cocktail recipe book featuring the drinks of the evening plus a handful of others, all with Chicago literary associations.

Hosts Mike Burke and Robert Charles guided us through the evening. Mike is a Chicago author (What You Don’t Know About Men) and Robert a Chicago magician (Magic Chicago), and between the two of them they have a magical way with words. If you think you’re in good hands, it might be an illusion. Robert for 12 years produced and starred in “Magic Chicago: The Windy City’s Premiere Showcase for Magic, Mystery and Wonder.” Robert also is a tarot reader. Michael and Robert live on the city’s North Side, in the Edgewater neighborhood.

Ryan Prindle was our bartender and Professor of Cocktails. He started his professional bartending career at the bottom working for a chain restaurant and learning the basics. After developing his knowledge and technique he has worked and done menu development for Iron Chef Stefanie Izard, Band of Bohemia (1 Michelin star), Billy Sunday (Top 10 acclaimed Amaro bars in the US) and Mordecai (2018 ChicagoEater bar of the year). He says, “It’s easy to make a cocktail but, a perfectly balanced cocktail takes practice and repetition.”

Sandra Seaton gave us a little taste of a Cyrus Colter passage that harkens back to a mid-century scene of elegance and some discomfort. She grew up on Chicago’s West Side, around 18th and Hamlin, before moving away as a young married woman. Her Chicago Trilogy, three one-act plays based on Colter’s short stories “A Chance Meeting,” “The Lookout,” and “Black for Dinner” premiered at the University of Michigan’s Arthur Miller Theater in 2009. It was also performed at the 2015 Atlanta Black Theatre Festival, directed by Mardra Thomas, with George Shirley, Mardra Thomas, and Keith Williams. Much of that cast reassembled as part of the Chicago Literary Hall of Fame’s production of a staged reading at the Evanston Literary Festival in 2017, under the direction of Fleetwood-Jourdain Theatre’s Artistic Director Tim Rhoze. As a much-in-demand playwright and librettist, Sandra has seen her work performed in major venues throughout the world, including Chicago. Sandra, a recipient of the Mark Twain Award “for distinguished contributions to Midwestern Literature” from the Society for the Study of Midwestern Literature, debuted her latest opera, Night Trip last year at the Kennedy Center’s National Washington Opera. The historical story of a girl from Chicago visiting her relatives in the South moves to the Portland Opera this year.

Anne-Marie Akin wrote a song especially for this occasion, and sang that for us, plus another! Anne-Marie might have been born and raised in Memphis, but she’s long been a Chicago girl, with deep ties to the Old Town School of Folk Music. A highly-lauded singer, songwriter, musician, and storyteller, Anne-Marie has performed and taught since 1986. She is an accomplished vocalist and guitar player, and also plays West-African djembe, banjo, and mountain dulcimer. As a former professional actress, playwright, and director, Anne-Marie's approach to teaching springs from the ensemble spirit of the theater.

Tarzan: Edgar Rice Burroughs: The famed writer of the Tarzan series, long a Chicago and Oak Park resident, knew a thing or two about alcohol. His father, Major George Tyler Burroughs, made his fortune as a whiskey producer in Chicago. Burroughs himself failed at most everything he did, until around the age of 35 he started writing these fantasy stories about a half-man, half-ape character. He flunked out as a cowboy, student, soldier, railroad cop, even pencil sharpener salesman. At one point, dabbling as a snake oil salesman, he pushed an ointment, Alcoa, that supposedly cured hair loss and alcoholism. The 1906 Pure Food and Drug Law ended that line of work. Burroughs invented this drink named after his most famous character.

Death in the Afternoon: Ernest Hemingway: Hemingway’s drinking adventures are the stuff of legends, and his almost scholarly interest in the subject well documented. Believe these or not, but Hemingway is said to have: gotten drunk with a bear; routinely beaten up people with whom his drinking buddy Fitzgerald had picked a fight; downed 17 double daiquiris in a single sitting; woke up AE Hotchner at six a.m, after a particularly long and brutal binge, to go marlin fishing. And yet Hemingway said, “Always do sober what you said you'd do drunk. That will teach you to keep your mouth shut.” He also said, “Don’t bother with churches, government buildings or city squares. If you want to know about a culture, spend a night in its bars.” This drink, named after his own book, has spawned many variations, including Hemingway’s own, Death in the Gulf Stream.

Note: Whether or not you are using high proof Absinthe this cocktail can be tough to put down considering Ernest was a master drinker. Current rendition of this cocktail allows you to have a few and still be able to walk afterwards.

Sazerac: Edna Ferber: Though born in Kalamazoo and later associated with New York City, Chicago was an important place in Pulitzer Prize-winning writer Ferber’s life. She spent part of her childhood and most of her young adult life in the city, and began her writing career here. One of the most prolific and celebrated writers of the first half of the twentieth century, Ferber set many of her early short stories and several major novels in the city. In Saratoga Trunk, her character Clio Dulaine returns to her native New Orleans to avenge the mistreatment of her mother by her father’s family. There is a particular scene in which Clio meets—and drinks with—Sophie Bellop, who is part competitor and part accomplice. They drink Sazerac. It was in pre-Civil War New Orleans that Sazerac came to public prominence, and eventually came widely to be considered America’s first cocktail.

Add .5 oz. of absinthe to rocks glass and ice then spin and tilt glass to coat in absinthe. Set aside. Then add Rye, Cognac, bitters and demerara to a separate mixing glass and stir with ice until desired temperature. Discard ice and absinthe from rocks glass and pour cocktail into absinthe rinsed glass. Express lemon peel over drink and set inside cocktail.

Donald G. Evans is the Founding Executive Director of the Chicago Literary Hall of Fame. He is the author of a novel and short story collection, and editor of an anthology. His personal blog often explores Chicago literature, including a recent post about the Chicago writers of the WPA. He will be leading a seminar on the subject at the Newberry Library beginning Tuesday, February 16.