A CLHOF Poem While You Wait

Poems While You Wait is a small, quirky concern, a quiet presence at Chicago literary festivals, book fairs, theaters, flea markets, and other corridors in which small, intellecturally curious types cluster. At first, it strikes one as all concept: wow! clever!! do me!!! It's a bit like the boardwalk artists offering to 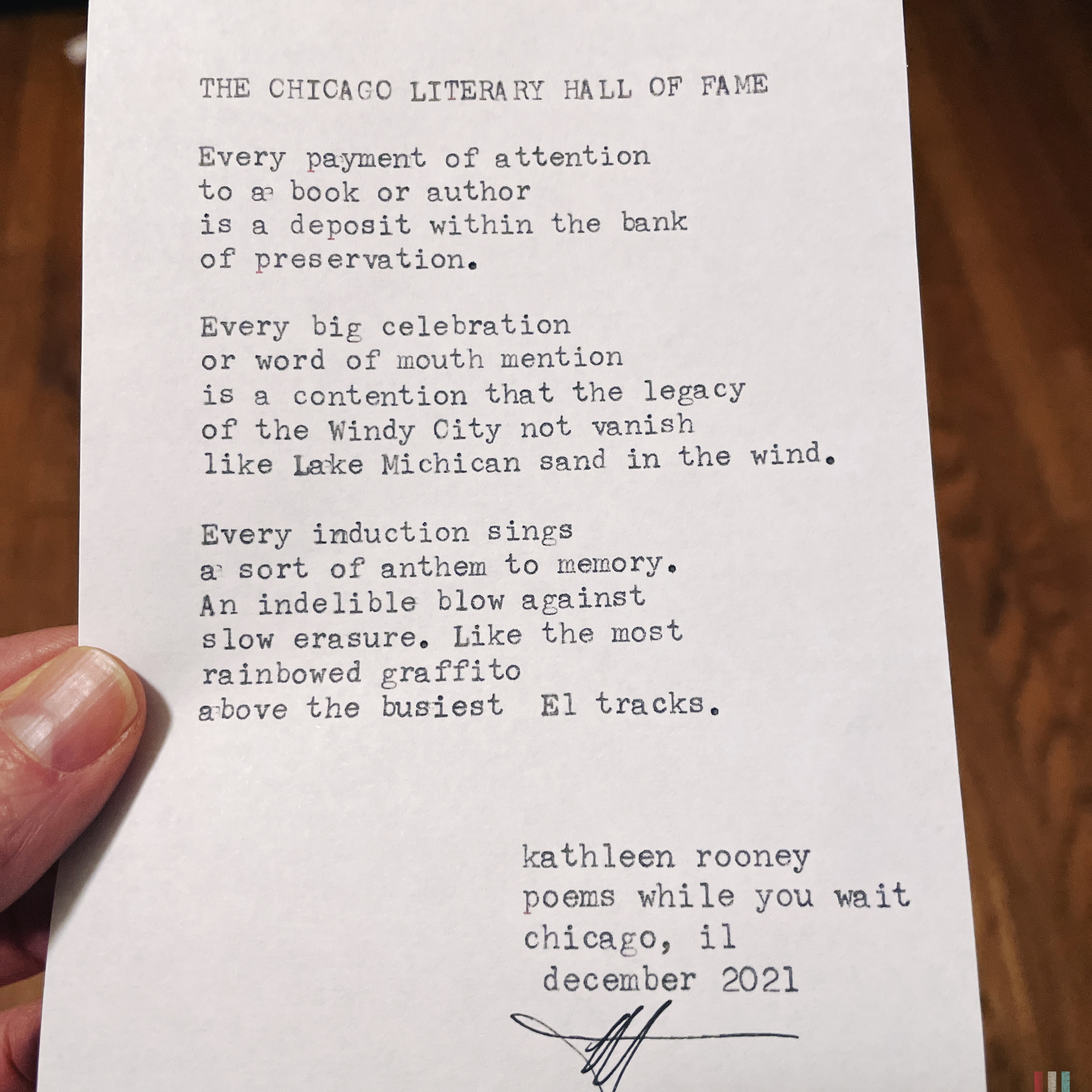 draw your caricacture. Except this is literature. We expect our literature to be created and consumed in private: the authors over there, us readers over here. Gimmick writing, we assume, is not good writing--not literature, as we think of it. When we hear about the woman blogging naked, we do not think, "Probably an incredible prose stylist!!!"

Kathleen Rooney is one of the masterminds behind Poems, and anybody that knows Kathleen and her work knows that she is far from a gimmick. Kathleen is an accomplished novelist, poet, critic, teacher, and publisher. She's probably a good cook, too. She founded Poems in 2011, along with Dave Landsberger and Eric Plattner, also not gimmicks.

This team--including other poets who show up for a turn or three--bangs out commissioned poems on vintage, portable typewriters. It takes maybe 15 minutes. The "client" tells Kathleen or one of her cohorts generally what they want, or else just provides some background, perhaps a theme. Want a revenge poem to send to your ex? No problem. A birthday poem for your toddler? Sure. Something about hiking the Alpines? You got it.

These poems, they're one of a kind. Here we begin to drift away from gimmicky and into profundity. Well, maybe profound is too strong. But definitely fun. Thoughtful. Provocative.

The process of making these poems requires human interaction. Authors, by the nature of their craft, spend a great deal of time in isolation. There are months and even years in which the work itself has no audience. With Poems, the author and reader meet, there is a kind of collaboration, and then, voila!: the work is done, it is published, and it has its audience. There is something crisp and satisfying in taking a project, however small, and seeing it to its conclusion. It's fun to giggle or sigh your general ideas to the Poems creator and then pace while you await the quickest delivery you've ever experienced.

Then there's the freedom inherent in the publication of the poem. The audience is one (unless the client chooses to share). Unlike conventional publishing, in which the goal is to reproduce, distribute and sell a great many copies, the goal here is to make this one reader happy. It's achievable and even, as we drift further from the sense of Poems as a gimmic, desirable. Kurt Vonnegut wrote in the introduction to Slapstick that he always wrote with an audience of one in mind. He meant this metaphorically, to make the point that in focusing on just his sister and what she would want to hear, his stories naturally appealed to a more universal audience. With Poems, the audience is literally one, but we see how the appeal is much broader. Take the poem created for the Chicago Literary Hall of Fame. It is to us, just us, and yet it captures our essence and even a larger sense of our relationship to humanity. Any voyeur peeking at this personal poem might understand a bit about the Chicago Literary Hall of Fame, but it might also lead them to personal reflections. This is, of course, the work of fine art. Of literature.

As Kathleen says, "Poetry is alive and well. People really like poetry."